My husband had the day off work today, so I slept in until (gasp) almost 8 am. That's pretty late for me. As soon as I was up, I darted off to ride. Izzy was fairly good today, but because I was an hour later than usual, she arena was a lot more busy with people who don't steer well. It's really hard to do concentrated work when you're watching out for a beginner rider and trying to not get run over by a careening draft horse. Still, we had some really nice trot work to the right and a lovely, lovely right lead canter depart. It was our first time cantering in my new saddle. We didn't try to do too much to the left for the aforementioned reasons.

I think I've come up with one other possible reason for Izzy's resistance to going forward in areas other than the sticky spot. She's kind of a lazy girl anyways, and if we keep in mind her stiff side, and then throw in her tendency to get behind my leg and stop before, it looks like we have the answer. So, while the sticky spot problem I think was psychological and I hope we've overcome it, the non-forwardness is probably a riding problem. I need to focus on getting her forward and not letting her fall behind my leg. When I mentioned a couple days about that it could be a horse problem, a rider problem, or both, I wasn't thinking that it could be all three. My mistake, I guess.

I also rode two other horses for Cathy today. One was Cassie, my old OTTB girl. I call her mine, but I've never properly owned her. I just leased her for like five years. Someone else is now interested in leasing a horse, and Cathy wanted me to get on the girls to get them going a little bit. Cassie was really good until I went to lunge her, and then she almost ripped my hand off. Silly old girl. I ended up just taking advantage of a brief quiet time in the arena and let her run to her heart's content. She felt a little off from having her feet done, though, so we just walked.

Then I got out Ellie, a chestnut Hanoverian/TB mare. She's our resident example of bad conformation. 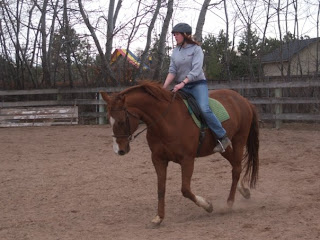 Here's a friend of mine riding Ellie. She (Ellie) toes in badly in front and I think her knees are twisted in slightly. That said, she a total puppy dog on the ground and very nice to be around. In regular work, she goes really well, and she could probably show comfortably up to first level dressage or so. She used to jump, but I don't think I'd do that to her anymore. She's just been hanging out in the pasture with Izzy for the past couple months, so she resembles a sausage right now. Poor happy fat pony.

A happy thing that happened today was that Izzy actually came up to me when I went to go get Ellie. She just wanted some attention, and was really sweet. Usually I go get her during breakfast time, so she's not too keen on being caught and certainly doesn't hang around when I turn her loose. It's nice to know my pony likes me too.
Posted by SprinklerBandit at 12:00 PM