I would post a picture, but, typical of me, I forgot to bring anything like a camera out to the barn with me. Whoops.

Anyways, it came late Thursday night, exactly as described. It's an older Ansur KonKlusion, which is their eventing model. It's treeless, but it does have a gullet of sorts. The new model can be seen here: Here's a picture that the seller sent me: 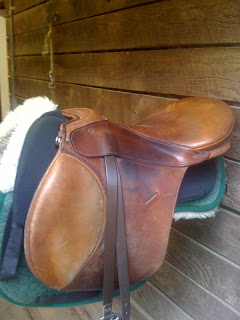 It's a bit darker right now because I very thoroughly cleaned and oiled it last night before I went to bed. The scuff marks are mostly gone, but some things are just a part of an old saddle and that's why we love them. For those of you who are adamantly opposed to Ansur business practices, this one was actually made in the Peter's Tack era. (For the record: I am neither for nor against their business practices. I just like their saddles.) 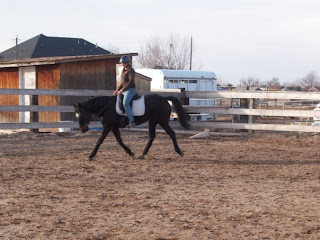 It was one of Cassie's first rides this spring and my friend hadn't been on in over a year, so they look pretty good considering. The KonKlusion (or KK) has a seat to it and almost a twist. Maybe the newer models do have a twist; I'm not wealthy enough to find out. It's a bit more secure feeling than the Classic, but it sure was different.

At any rate, I'm unfamiliar with gulleted but treeless saddles. When I put the new one on Izzy this morning, it looked like the pommel was going to rub her, so I put a little wedge pad underneath it. That kept the pommel off her withers, but after I'd ridden for a while, the gullet was right down on her. So... I don't know. It wasn't hurting or pinching, because her head goes straight up in the air when something hurts. All Ansur saddles are built on the same basic Flex Core, and the Classic sits on the horse's back directly, so maybe it's ok? Still, it seems like a gulleted saddle ought to have gullet clearance.

If that's true, there are various pads made specifically for this purpose. They're kind of spendy, but maybe I can find one used. You'd be surprised what a little dedicated searching can turn up. ;-) Still, if it's not bothering her, is it a problem? I don't know.

In other training news, the weather changed this weekend while I was gone. That always gets the horses a little excited, and as such, Izzy was pretty distracted when I was riding her. When I asked her to move off my left leg and she wouldn't and then I made her, she threw a fit, complete with a nice buck and a lunge forward. After that, we finished out the day by doing lots of bending left and right with little leg yields. We didn't canter because I want to know more about the saddle issue before going much further.
Posted by SprinklerBandit at 11:48 AM