I think Izzy is settling in to the new place well. I didn't make it out to see her yesterday because the weather was lousy and my grandma was having a good day. Since time with grandma is limited, Izzy lost out. (As a rehash, Izzy was a nutcase on Monday.) 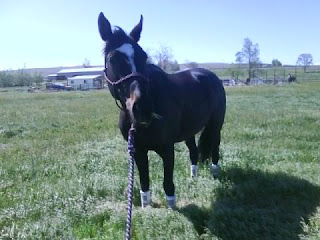 Why yes, she is knee deep in green grass. If only the pasture fences were in... oh well. One thing at a time.

Anyways. After a week of not riding for various reasons, I got to ride both girls today. Now I'm going to brag about it, because I'm pretty proud of how it went.

CASSIE:
Cassie is an 18 year old OTTB who I've known and ridden for years. She's also Izzy's mom. On Monday, she was actually pretty quiet, so I got her out first today. Today was not as quiet. She didn't like being by herself and out of sight of other horses that she knew. To deal with this, I turned her loose in the (cool big) arena. Galloping is relaxing for Cassie and she has an amazing recovery time, so I'm not concerned about wearing her out. She galloped quite a lot and whinnied at her friends some. When she was a bit calmer, I got on. I noticed that there's a spot in the windbreak by the arena that lets her see her friends pretty well, so we rode in a big circle by that spot.

We started out cantering. I took no contact, since Cassie isn't big on it anyways. We did a lot of shorten/lengthens in the canter, then did a few trot/canter transitions. We didn't go around the whole arena, but when she got strong, I just took her on a bigger circle (maybe half the arena) and let her gallop some. Remember, we're trying to relax in a new place, not do a dressage test. When she settled and was more or less listening to me, I dismounted and took her back to her friends. I think this is important. She needs to learn that she goes to this arena to work, then goes back home. Once she figures it out, I think the anxiety will disappear.

IZZY:
Izzy is cut from a different cloth than her mother. She likes to gallop, but she doesn't have momma's ability to focus or her almost tireless gallop. Thus, I needed to get her accustomed to working in the new arena without wearing her out. I can wear out her body long before her brain and that's a bad situation. Instead of turning Izzy loose to run and look at stuff on her own, I put her on the lunge line. We just started walking the perimeter of the arena together. When she stopped, pricked her ears, and snorted at something, I'd let her look at it. When she looked away, I'd ask her to walk a 5ish meter circle around me and past the scary thing. When she could walk the circle without changing pace or gait, we would continue walking the rail. It probably took half an hour to get all the way around, but it was worth it. We finished that off by lunging both ways, w/t/c just to get her going forward and listening to me.

She didn't offer any real disobedience, so I hopped on. I'll confess that we only went right today because the wind is still ripping through here and I didn't want to push her too hard, but she was really good and almost relaxed, so we did some walk/trot/canter transitions and then I got off. I untacked her at my car (since we don't have the tackroom area set up yet) and then put her halter on and took her out in the field to graze. She only whinnied to her friends once while I had her out in the arena, and not at all while she was grazing.

What a day!
Posted by SprinklerBandit at 1:42 PM