In my last post, I mentioned the struggle that Izzy and I were having with the whole concept of neck reining. We just weren't really getting it with any regularity. I knew it was mostly my fault; she's a quick learner, but I know literally nothing about training a western horse. I've never even ridden a well trained one. The best I've done was go on a couple trail rides with dude ranch horses when I was 8 and 9. Since then, it's been english all the way.

Thanks to fellow blogger Chelsea's comments yesterday, I decided to try a new plan. 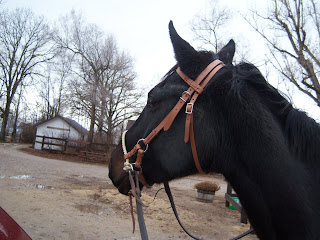 Yep. Split reins on the side pull. As she pointed out, the action of the snaffle is such that it directly contradicts what I'm trying to tell her with neck reining. No wonder the poor mare was confused. Admittedly, Chelsea recommended a bosal, which I do not own, but I figured the sidepull was worth a shot.

Magically, it worked so much better. At the walk and trot particularly, Izzy was so much better as far as responding to me with neck reining. We started out just walking and trotting around, going forward, getting settled. Then, we did serpentines and circles all around the arena. Hooray! It went quit well. Only very occasionally did I have to add in some direct reining to remind her of which way to bend through a turn. 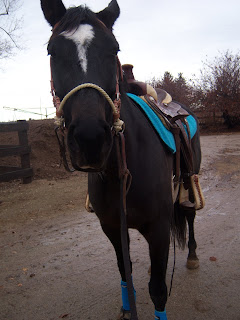 We still pretty much fall apart at the canter. That's not something I can do a lot about right now because I think the biggest problem is the arena footing. It's really deep, so it takes a lot of strength to maintain a good quality canter. Plus, it probably isn't overly great for legs and tendons and all that. The footing is part of why we're playing western this winter--it gives us a way to work and stay in shape without straining anything. The footing is just not appropriate for hard dressage workouts.

I really, really want to go on a trail ride, but the masive amount of snow we got has melted off. Then it dumped rain yesterday, and now everything is frozen. Boo.


In other exciting news, I did most of my Christmas shopping online last week, so stuff has started showing up this week. In general, it's nice stuff for other people, but I managed to sneak some Aimee and Izzy gear in there. (Lol, how kind of me to think of us...) Specifically, yesterday brought me a pretty, navy blue Horsewares hoody and Izzy got the Amigo jersey cooler in Java and Brick. I admit it: their marketing worked. I saw this picture early this year and thought, "Izzy needs that", but I didn't buy it. Then smartpak had a 15% off sale and I can always get free shipping and Izzy needs a cooler... and the result will be documented this afternoon. 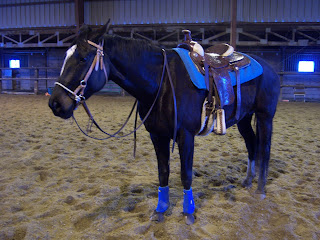 This picture doesn't show it as well as I'd like, but basically, it's cold enough and Izzy works hard enough that I wanted something to put on her to ease the cooling out process. I don't want to clip and blanket and she seems quite happy with her fuzzy coat, so cooler it is.

She's so adorable in this (and every) picture. What it doesn't show is that when I stepped back to take this picture, she thought she was supposed to follow me. I verbally corrected her, which made her mad, so she trotted off to the other end of the arena to pout. I had to go catch her, remind her she wasn't in trouble, and then try again.
Posted by SprinklerBandit at 8:23 AM