I love where I board. It's out there. You all know it.

The problem is that I don't always love who I board with. I'm sure most of you who have ever boarded can relate.

For example: yesterday, I rode Izzy. Yay! Love that mare. For the second time in her entire life, I put a back cinch of the western saddle and I lunged her in a curb bit. (Note: I lunged her off the halter. She was wearing the bridle over it.) She was being really, really good, especially since Teri warned me that some horses buck on feeling the second cinch. Not Izzy: she was being fabulous.

I took her over to the rail to put away the lunge line and get ready to ride. Another boarder (who rides only dressage) was getting ready. She started talking about Izzy, so I mentioned that it was her second time in these accouterments and how proud I was of her. The boarder promptly informed me that the second cinch is the most useless piece of tack in the world and she doesn't know why anyone who is a non-roper would use one. Weird, but ok. Whatever. I didn't bother to mention to her that 1) my relatives own a working cattle ranch and I WILL find a way to bet the pony mare up there and 2) I firmly believe in getting Izzy used to just about everything so we never have an issue with new stuff. I mean really. She was giving me an unasked for opinion and I didn't feel the need to defend myself.

I got on Izzy and we rode around, mostly at the walk, just working on stopping, going, and turning, relying almost entirely on my seat and legs. If she didn't respond, I'd give a little 'bump' with the bit, but the point of a curb is to not use it, basically, and that was the plan. I want Izzy to be accustomed to carrying it and I want to be able to ride in it, but I have no aspirations to ALWAYS ride in it or anything like that. The dressage lady got on and went about her business. Now, our indoor arena is relatively small, so it can be a challenge to share. That said, we both have equal rights to ride in it, and I've never had a problem before.

Nonetheless, the dressage lady proceeds to ride around in n discernible pattern, constantly cutting Izzy and I off. I figure it's not a big deal; we're walking and working on stopping, so I guess that's as good an opportunity as any to put a stop in. I'm frustrated, but it's manageable.

The lady cuts us off again, but instead of going on, stops and says, "Izzy, you need to tell your mom that she's not backing you up right..." and goes on, criticizing us and my riding. I was floored. I was so shocked that I didn't say anything. I just moved Izzy around the lady and went on my way. Izzy to this point, had been lovely. She wasn't super-responsive, but it's a learning curve for both of us, so when she figured out the right answer, she would do it. I was/am very pleased with her.

Within one lap of the arena, I realized that I needed to get off, no ifs, ands, or buts. That lady had so gotten under my skin that I needed 1) to not be around her and 2) to not screw up the ride for Izzy. I dismounted (as out of the way as I could be), took Izzy's bridle off (no sense in leading by a curb and she was wearing her halter underneath), and led Izzy out of the arena with the bridle hanging on the saddle horn.

The lady rode up to the rail and halted. She then proceeded to berate me for (gasp!) using a curb bit on my horse. I looked at her, didn't speak, and took Izzy back to the barn. I was LIVID. Izzy is my horse and I'll do whatever I bloody want with her. I do not owe any sort of explanation to the other boarders for any reason. If I wanted their opinion, I would ask for it.

Izzy was (and is) fine. Throughout our entire ride, she was calm, relaxed, and soft. There was no head-throwing, tail-wringing, bit-chomping, back-hollowing or any other behavior that would lead anyone to believe she was anything other than comfortable and believe you me, she is a very expressive horse when she is not happy. I am willing to consider other options and opinions from people I pay to have them or people I respect who are equally respectable in sharing their opinions, but it just plain pisses me off for someone to butt in and give their (stupid) opinions unasked.

I don't think I have words to express how angry and irritated and upset I was. Fortunately, I am beyond wanting to just swear at the lady and tell her exactly what I think of her (not much). I know that it is in all our best interests to remain civil since we will continue to see each other on a regular basis. Yesterday, I tried the do-not-engage-and-let-it-roll-off method. Let's just say it failed miserably. I'm still pissed about this. Obviously, if this comes up again, I need to say something to let her know I don't want her opinion, but I need to say it in such a way (at least as first) that will not cause too many relational problems. I am not opposed to pissing someone off to get them to leave me alone, but I don't think it's a good first approach. You know. Peace and goodwill towards men and all that. 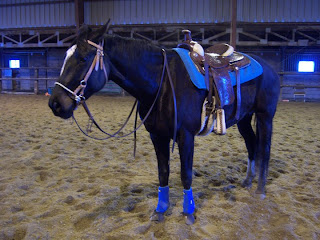 Picture of Izzy being cute for good measure.
Posted by SprinklerBandit at 8:25 AM