The Right Horse at the Right Time

Several of you have posted about how you met/got your horses and it was just meant to be. There was a moment when you just knew that you were meant for each other. I think that's beautiful.

It never happened to me.

What I want to do today is follow in Kate's theme (initially brought up by Denali's Mom) about how you and your horse resemble each other.

When I was in highschool and riding, I leased an amazing OTTB mare named Cassie. She was light, catty, athletic, and really, really nervous. She was also aloof to most people, possessive of me, and touchy. We mirrored each other in a lot of ways--we even picked up bad habits from each other. To this day, I tend to walk backwards when I'm nervous--learned it from her. I didn't realize it at the time, but I was very sensitive to other people, not prone to making a lot of friends, and generally felt out of place, just like she did. Like her, however, I earned my place by my accomplishments, though I still didn't have a lot of friends. When she had her baby, I was one of two people (the other was the BO) who she allowed to come in the stall and see it. (Funny thing: the baby was Izzy). When I started riding other horses, Cassie let me know it was not ok. Instead of meeting me at the gate, she would pin her ears and make me come get her. The remedy to the situation was to feed her a treat before I even looked at another horse. Then she knew she was still first.

I pretty much quit riding in college--I didn't have time and I was exploring other interests. I still worked at the barn once a week for my horsey fix, but Cassie was having babies and I didn't have the time to invest in another horse, so not much happened.

In a gesture of absolute horsey-person kindness, the BO gave me Cassie's last baby, a lovely little TB/Friesian cross filly. 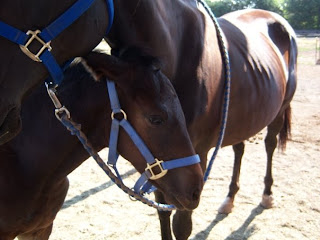 This is her first time wearing a halter, hanging out with her mommy, my beloved Cassie. FYI, Cassie is a super, super hard keeper with a baby on her. Yes, she's ribby in this picture, but she was eating like half a bale of fabulous hay a day, plus getting senior and vitamins and beet pulp. I think she just spent so much nervous energy defending her baby from any other horse ever looking at her that it was almost impossible to keep enough weight on her.

I really liked the baby whom I dubbed ' Natasya' after her Daddy, Nikolai. 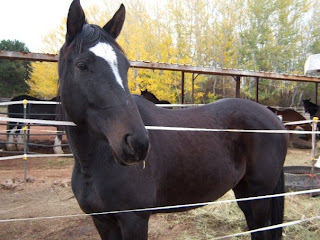 I hadn't seen Izzy since her owner took her away as a weanling, but I immediately recognized her--the funny facial marking, the friendly personality, the lovely conformation. I didn't need anyone to tell me who the tall, gorgeous new mare was when she showed up one day. Then her owner bought another horse, bringing her total up to three, and I heard that she planned to sell Izzy. At this point, I wasn't attached. I had patted Izzy and said hello, but I don't like to bond with other people's horses, so I'd pretty much left her alone.


The more I thought about Izzy being for sale, the more the wheels turned in my head. I was newly married and in college. I had plenty of time (ha!) to train a horse, but in a couple years, when my baby was ready to start, there was no telling where I'd be in life. I asked a few questions about money and horse value (none about training), and then proposed (through the BO) a trade.

Izzy's owner took a couple weeks to think it over, during which my feelings wildly vacillated. Half the time I thought I was making a huge mistake. I didn't know what kind of baggage Izzy came with, but I knew her owner couldn't handle her. Besides, my baby was super nice. What if I was trading a super nice horse for a mediocre one that I'd never really like? Ultimately, I knew I'd be ok whichever way my offer came out. I really liked my baby, but the timing was just better for Izzy, who was 5 at the time.

On February 1, 2009, I found myself as the proud owner of a barely-handled, quite muddy Oldenburg mare, registered name Isadora. I was elated.

And then I started hearing stories... the weather had finally started to improve, so I was actually starting to see other boarders. I learned that the way all the other boarders were introduced to Izzy and her former owner was by watching the mare break free and run off, then helping to catch her. They thought I was completely crazy for giving up such a nice horse to take on a crazy one. I went to the store, bought myself a rope halter, and went for it.

It was a long, trying process, some of which you have gotten to witness through our blog. One of our more memorable early moments was when Izzy decided to pull the same prank on me that she did for her previous owner--she pulled back while tied. Fortunately for both of us, I had actually tied her with the rope halter. There was nothing I could or would do but stand back and watched. She pulled with all her might for about 30 seconds. Then you saw the wheels turn in her head; her ears flicked back and forth, and then she just stepped forward and gave. She's never done it again. Smart girl.

I don't wonder if I did the right thing anymore. Izzy has turned into a fabulous horse. Really, we've been able to grow together. She and I very much mirror each other at this point in life. We're both pretty calm, but there's always the potential for nerves. We're willing to try new things, but we tend to prefer our routines. We're relatively even-keeled, but we definitely have a temper that we'll express when pushed. We figure stuff out... hard or easy, we'll get there. We express when we're not happy, and you will always know where you stand with us.

Plus, you can read everything in our faces. We can't lie for anything. 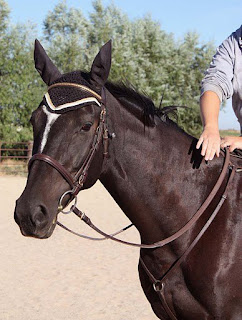 Posted by SprinklerBandit at 10:05 AM