Woohoo!! XC pics are in!


They are from the lesson and not from the world's faster BN course, but they actually make us look reasonably competent.

This one is a little deceptive--we are actually jumping a much smaller cabin to the left of the one you can see. Looks like Cuna would clear either one with aplomb though, doesn't it? 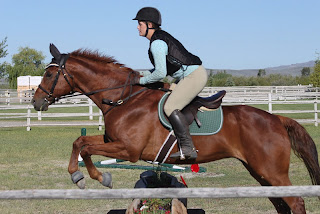 This was the giant log with a flowerbox in the top that I thought looked huge. Incidentally, it was the first novice jump of the day.

As you can see, Cuna is pretty much just cantering over it without being too impressed.

The tack 'hos of the world are probably sharing a collective gasp that one of their own is running xc in nothing but bell boots. Trust me, I was equally apalled. In the shuffle of packing while Cuna was lame, I completely forgot the fancy XC boots (because lame horses don't jump) and I didn't want to risk the neoprene on a recent rub. Thankfully, Cuna is the world's most careful horse and he was fine without the boots. We did manage to borrow a pair for Sunday. 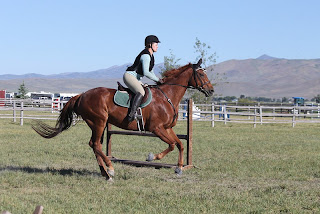 Going for a gallop to the sunken road. This was the first jump where I realized that Things were going to be alright. We had to canter through the sunken road and then jump an A frame (that looked massive) coming out. I was so concerned and Cuna just took me to the fence and answered the question without evening waiting for my input. 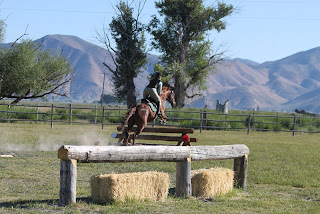 Out of the sunken road, over the A Frame. This is also when I began to grasp that I might not have enough bit in. It took nearly a whole lap of the field to get him to soften enough to come back to me. Hmm.

This was novice question #3 of the day. I had no idea. 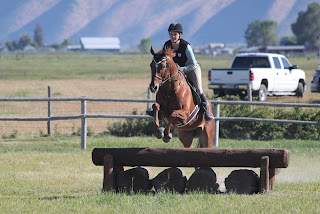 By now, I had a pretty good grasp that all I had to do was point and shoot. I'd never jumped this before and it looks a little funny, but it's also BN sized and kind of non threatening, so we just cantered right over. 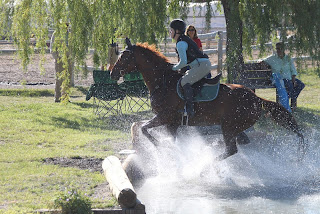 I'll leave you with this: the bank out of water. I've always wanted a good water/spray picture, and now I definitely have it. I had forgotten how cool it was to trot and canter through the water--pretty trippy, really. It's like slow motion, only you're going full speed.

:D Can't wait til next time.
Posted by SprinklerBandit at 7:16 AM