It's been a wild ride this year! I was getting pictures ready for this post, and I had to just take a minute to be grateful for just how far I've come this year, both as a person and as a rider. I haven't made a lot of material changes, but the immaterial progress is pretty fun to chart. Let's give it a shot!

January was cold and dreary. I was riding with Izzy. She scared the crap out of me. I loved watching her and dressing her, not so fond of being in the saddle. I thought things were normal and carried on as usual. I was working a ton for our instructor and made lots of excuses not to ride.


Along came February and with it, a giant red gelding.

Cuna opened up new worlds for me. I loved him within days of meeting him and became more and more obsessed as time went on. It was on his back that the final decision to sell Izzy was made. He carried me through it all like the gentleman he can be. We were jumping crossrails and little fences and I was scared stiff, but he took care of me.


March was an interesting month. I went to Thermal with the barn and was able to hash out my feelings about Izzy. I also realized that Cuna wasn't just my temporary loaner horse: he was the one for me.

I picked up more hours at both jobs so Izzy could come back to the barn and Cuna could stay with me through the sale process. We went to our first show together and won the 2'6" jumpers.

April was all about building a partnership. Cuna and I explored the world together. He had to start with square one as far as reeducating me, but like a couple of hopelessly annoying teenagers, we did everything together.

We hacked. We galloped. We jumped. We babysat. We played with tack and Cuna learned to model.

May brought a new set of challenges. We hauled out of state to go XC schooling for the first time since my wreck. I was disappointed in my ride, so I focused on jumping.

After two weeks, we got the best jumping pictures of our lives together.

Cuna looked amazing in his summer coat and we were gearing up for the show season.


June was XC schooling round two. I started learning how to trust my horse and we did our first ever racehorse gallop.

We went to a jumper schooling show and I started to figure out that this whole competition scene could be fun from the saddle.


July brought our first out of town show and our first official event derby together. Cuna taught me what it's like to ride an XC horse and exhibited the advantages of strong bits.

It was my first ever ride around the course on a horse I hadn't trained, and it was amazing. We snagged a ribbon on our first-ever BN after moving up from intro because I finally realized that we could do this.

Steph headed up to her summer base camp, but Cuna and I spent the (smokey) summer hacking around and really enjoy our all-access-pass to the local hills.

August came in with a bang! Cuna got his hock injected the last weekend of July. We took a series of dressage lessons so we could be more competitive at BN at our upcoming trial. I was mentally prepared, and Cuna brought the awesome. After the best dressage test of our career, we went double clear in stadium and XC and brought home the goods.

I was completely thrilled. And I wanted to move up.


September saw us headed up to summer camp for a weekend away. Cuna and I jumped some of the biggest and most technical course I have ever done and we had a blast the whole time. We hacked in wooded hills, grazed in green pastures, and leaped giant things without a second thought.

Although we were mostly on our own back home, we spent lots of time building condition and enjoying our time together. Anything that could be done on horseback was just better on a big red TB gelding.


October brought changes for us. We were moving to a new barn to continue the trend of working and riding with our most favorite coach.

We rode through the hills and took in the scenery, then packed up and headed to the new home base.


November saw us in regular lessons and jumping bigger and harder courses than before. I began increasing my technical knowledge and Cuna was going better all the time. He responded well to the improvement in my riding.

Despite my assuring everyone that "I didn't buy him to do dressage", Cuna and I hit the dressage hard to improve our balance and collection for jumping. 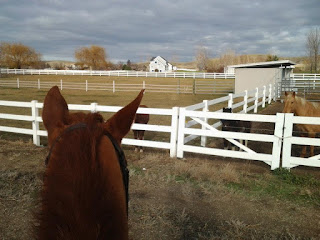 We're on to December! I was going to wait until later in the month to do this, but we're officially done showing for the year. We don't have our gorgeous hills on demand any more, but we've been busy adventure hacking through subdivisions and even occasionally riding in the sandbox.

I made several sets of goals for the year and threw them all out the window, so I don't have a lot of concrete comparisons to make. That said, I started the year on Izzy, terrified of crossrails. I'm finishing it out jumping 3' courses and (and 3'3" singles) confidently while getting ready for what promises to be an exciting 2013!!
Posted by SprinklerBandit at 11:29 AM