First off: to reward our contest participants who were not lucky enough to win a Riding Ninja tshirt, the Riding Ninja store is continuing their Easter sale through the end of the week. Buy two, get one free on all items. Just enter the code "Buy2Get1" at the checkout. Store is here.

Next, let's look at a fun tack topic: Reins!

There are lots of things we can do without, but reins are one thing most every rider has in common. Given that we spend more hands-on time with our reins than any other piece of tack, it's important to have reins you like. With the dizzying selection of reins available to the general public, I went ahead and pow wowed with fellow budget-challenged tack 'ho Monica from Chasing the Dream to make an authoritative list of reins types and uses and our opinions thereon.

Rubber Reins
Rubber reins are generally leather at the bit attachment and leather at the buckle, with a strip of rubber where the rider's hands go. They are popular with jumpers and eventers, acceptable in the dressage ring, and all wrong for hunters and breed shows. There are many different kinds available.
-Soft grip-
SB: These are the best reins ever, imho. They have all the grip of rubber with the flexibility of a leather rein and unmatched durability. I oogled them until I could borrow a set, nearly stole the borrowed ones, and now own a set for two of my three bridles. They are easy on the hands, easy to clean, and oh so worth the money.


-Thin Line-
Monica: I wish I knew what they were. They sound like rubber reins on a diet. Can I go on this diet?
SB: These were very well reviewed online, so I ended up with a couple of pairs. Truth? Although they are soft, I thought there were too slim for my hands to hold well and the thinline material was really, really easy to harm. For example, if you put flyspray on your horse, you can't use them. Problem? I think yes.

-large pimple-
Monica: I had a pair of white ones for XC. After 4 years they got waaaay too sticky (all the cleaning-white gets nasty. And of course I used it for the dirtiest phase) and I had to throw them out. I think I cried actually since they were about $80. I didn't really like them too well either. Too thick, and when wet, they still slipped. Kind of the point of rubber reins. Perhaps tan ones would be better since they shouldnt have to be cleaned with soap, which probably led to the degradation of the rubber so quickly.
SB: These are a mixed bag. I have some nice Nunn Finer ones and they're alright, but the cheaper ones can be downright nasty. I actually had a new pair tear the skin off my fingers from the ridges in the rubber. Ouch! Once they're broken in, they're fine... usually. They are generally pretty inexpensive for rubber reins and the grip is pretty good. I never did use abrasive cleaners and I haven't killed a pair yet, so that's probably good.

-small pimple-
SB: I've actually never had these. Every time I touch them, I just think they're awful. I haven't even run into someone at our barn who has them, so use at your own risk, I guess.

-garish colors-
Monica: absolutely just awful. I remember using these when I was a wee child taking lessons, thinking they were the worst things ever invented. Not only were the colors gross, but the leather stops in between just got in the way of my little fingers. The thickness combined with that made it actually hurt my hands.


Laced reins
Popular with hunter riders, breed show people, and those who were raised in the 70s, laced reins are leather and have a section of lacing run through the area where the rider's hands go. I assume it's a throwback to the hunt field in pre-rubber days, but I know that laced rein lovers are as adamant as they are old fashioned.
-flat-
Monica: I have a pair for my double bridle. They are literally 1/4in wide and IMPOSSIBLE to hold on to. However, with two sets of reins, its almost a necessity. I think that's actually the point of the curb bit rein, to make you forget its their until you absolutely need it! I would never use this for a jump bridle, or even in dressage as I find them too slippery and thin. I like some meat on my reins...but not too much.
-raised-
SB: Ok, I admit it. When the hunter riders have fancy raised bridles and matching fancy raised reins, I get all giddy. I did cave a few years ago and get my own raised, laced reins. Guess what? HATE. That pretty raised part does not bend like a plain rein. I'm sure it's fine if you're used to it, but I am not ok with it. So. Pretty and go for it if you can. I can't.
-laced-
Monica: Standard for most bridles until maybe 6 years ago I think. Not my favorite things (can you see a trend? Pickiest. rein. person. ever) since brand new ones take ages to break in, they are difficult to clean and sometimes hurt hands if  you have a strong horsey that pulls. Ahem, Mr. Pronto....& Yankee, as a baby.
SB: A nice, old, broken-in pair can be ok, but with the advancements with rubber reins, I just don't see the point. They are IMPOSSIBLE to clean, dirt gets in every crevice, and soap/condition always seems to leave a little bit behind. Ugh.


-rubber lined-
SB: I have always wanted to try these--they're pretty like laced reins, but the rubbed on the inside gives them a lot more grip. I do wonder if they'd hurt my hands, but there's no way to know...
Monica: would love to try I think! trying to convince the boy that I need them for my bday. Mwah ahahah.

Web Reins
-with stops-
SB: I snagged a pair of these because I was dealing with an annoying tendency to hold my reins at a different length. They're cheap and they did the trick, but I just don't like how they feel in my hands and they are at massive PITA to clean. You can do better. Take it from me.
-with stops & with rubber-
Monica: BEST. FANTABULOUS. LOVE. Like, I would date them if they were a person. I use them for dressage and they are perfect. Perfect grip, width, everything. Even the stops help me keep the reins even in my hands ( blast that cursed inside hand!!) and aren't too bulky. I will never use anything else in my whole life for flatwork.
SB: While Monica makes some good points, they are still hard to clean AND the rubber seems to wear out pretty fast. Maybe I've only been around the cheap versions? Hard to say. 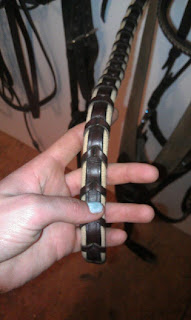 Mystery Reins-
Monica: Not even sure WHAT these bad boys could be called but they are the mother of all perfect rein babies. They are cotton laced leather braided reins, tan. I love love love love love them. Did I mention that I love them? I bought them on a whim last summer after eyeing them for a few months and I have never regretted that $95 (the most I have ever and will ever spend on reins, by the way. I'm a cheap whore)!! I use them for XC and stadium (though I'm still looking for that pair of reins for stadium that is my miracle..in typical tack whore fashion, I want a set of reins for each bridle, for two reasons. I LOATHE changing reins, esp in winter, and I feel using them for two phases-practice & show, wears them out faster) and they are perfection. Even when wet they are not slippery thanks to the cotton braiding. Also the easiest to change from bit to bit. Expensive leather really is worth it. ABSOLUTELY recommend. trouble is, I've only ever seen them at my local tack store.

Blue nylon roping reins-
Monica: I initially used these for XC since when wet they arent slippery (Yankee sweats like a faucet in summer...and winter), but after Novice,  not practical since you have to slip reins for drops and they were too short. I love the blue color though, they matched :D