I somehow went from not having a lesson since May to have three lessons in one week. It was glorious, let me tell you. I've built up a little credit with S, so I have two more lessons coming eventually. :D

On Friday, a new friend came out to ride. She does love OTTBs and is -lovely- on a horse (and off, but who's counting?). After our wild adventures before Thanksgiving, I expected Courage to put on a show. Not so. He was dead lazy and his new friend Jess had to pick up a whip. She put him to work and had a good time, and he looked like this at the end of her ride, so yeah. I'm a fan.

That brings us to Saturday. Our last lesson with S was explosive.Courage learned how to leap and flail, but hey, I learned how to ride it, and it pretty much just makes me laugh.

I focused on keeping my body quiet while getting him forward off my leg in warmup, and was rewarded by S showing up and being totally blown away by how great we were doing. I did have to admit that we were mostly just coasting on what Jess did the day before, but hey, it was fun.

And then to work! S had me really focus on making a difference with my leg. Ask nicely, then back it up. She pointed out that he doesn't know when he's ignoring me--I have to teach what the proper responses even are. We also addressed the crookedness in his body by fixing my position. He tends to twist his head and get behind my leg. Solution: hold my hands level, reins even, and insist on forward. Voila!

He was still bugging out his shoulder on a left circle, so we broke it back down to the walk and introduced a little bit of turn on the haunches/baby counter bend to teach him what responses I was looking for and give me some tools.

The specific exercise for the day was first to trot over three poles in a row and allow Courage to learn to use himself and spring off the ground while pushing from behind. Rock. Star. What can I say? We did a couple reps each direction, but the little dude nailed it.

And then we cantered! I made it a point to keep my heels not and not be apprehensive. If I look where I'm going and ride to it, he's actually been very good. For the canter poles, we focused on doing two on a circle. I had to generate the energy and set the pace, then settle the last three strides and let him make his own mistakes. As S pointed out, we want him to screw up at this point, especially over poles. Instead of trying to save him, I just have to let him learn to figure it out. We had good moments and less good moments, and THEY ARE ON VIDEO.

They aren't earthshaking or incredible, but if you watch about ten seconds, you will see his lovely to-die-for canter. This horse=win. The right lead was a non-event. I worked on riding better and he responded so well. This was the lead with all the leaping and flailing, and he was foot perfect on Saturday. I was so proud of both of us.


We were having some trouble with losing him out the corner, so S threw down another pole as a "fake arena wall" and then had me exaggerate the turn with my body so I wouldn't disengage him by pulling on the reins. Magic!

Then we did the left lead. This video is a little more fun, just because he goes through the poles, then slips, then is mad that he slips and flails away. I just sat chilly and he figured it out.

Regardless. I am just loving watching the little guy move. He's really start to get it. His body is changing, his stride is changing, his brain is changing. I think the horrid weather up coming (rain and ice, yay no riding) will actually be good for him because I think the mini vacation will only help us out at this point. 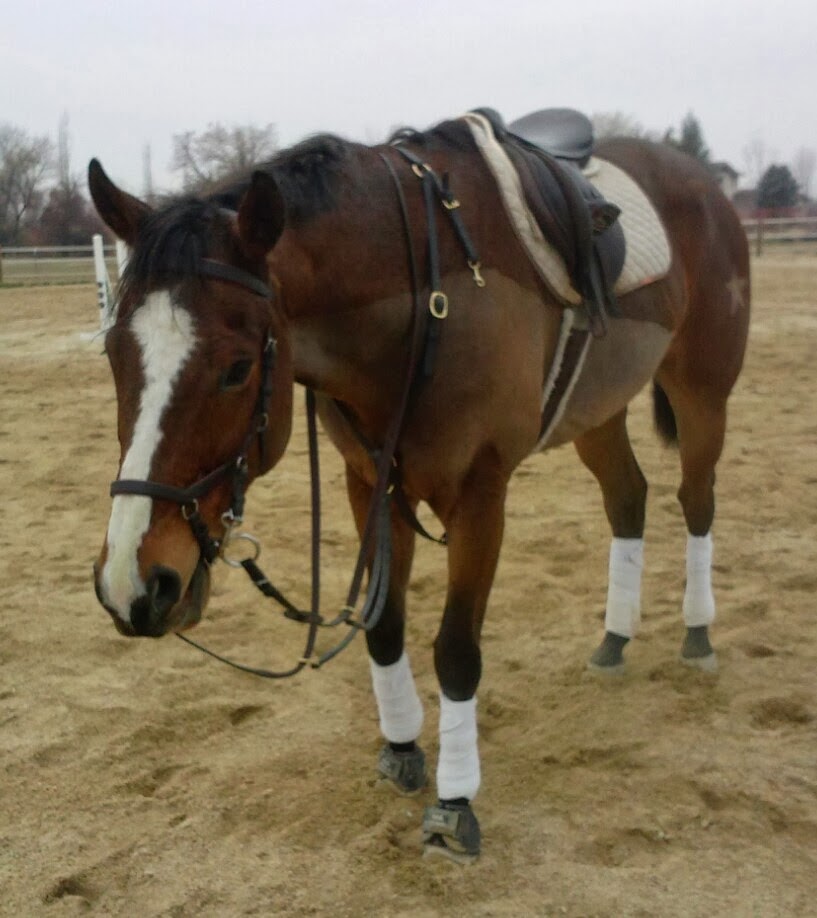 Some homework from our lesson:
1) Introduce the turn on the haunches in hand so he can learn the footwork a bit better.
2) Raise my inside hand. I drop it both directions and it's not helping his straightness.
3) I need to worry a little less about the quality of his gaits right now and focus more on the simple response to leg. The quality will be very easy to address once he is forward.


I think there was more, but this is my first chance to sit down and write about it, so I hope I'm not missing too much.

Posted by SprinklerBandit at 6:30 AM