Probably my favorite aspect of having a blog is just the ability it gives me to look back over my life and see where I've been and where I'm headed. I love this time of year--I look through my posts from the past year and pick out one per month that really summarized what that month was about. I usually try to do a goals wrap up, but that was an epic fail this year for reasons completely out of my control. Instead of worrying about that, let's look at what happened in 2013!

This goes down as the second most miserable month of my life and I was I was being hyperbolic. I was laid off from my office job and picked up full time hours at the barn just in time for Idaho to experience three weeks of record breaking cold. Highs in the single digits, lows below zero, and I was struggling just to put gas in my car. Did I mention the barn had no power and the hydrants all froze and I was hand-carrying buckets to all 17 horses? Here's a post I wrote just before the cold really got bad: Winter Sets In.

Basically I just appreciated what Cuna and I had going. I wrote One Year and One Day to celebrate our first anniversary. The real take away from February was just reflecting on what great things Cuna had been able to do for me.

I realized the value of a schoolmaster and overcame some lingering mental blocks about what I perceived as failures on my part with the mare I sold last year. Here's the post that sums up my feelings on the matter: Honesty and Horsemanship

Cuna and I were taking some dressage lessons and advancing quickly. In Fancy Pants Dressage, I talk about the progress we were making. My blogging was down that month--Cuna was having some odd problems that didn't make sense. Little things here and there were popping up. None of them were concerning on their own, but putting the pieces together wasn't making a lot of sense. Cuna tied up on a trail ride in March, summed up in the post: A Scare

More changes. Cuna and I kept working hard at the dressage with an occasional jump lesson. Elbows on Fire is a post where I talk about our breakthroughs. I got his hocks injected again and he was in fine form. His body looked like a proper dressage horse and his neck was incredible.


We were also getting pretty burned out on arena work. He and I started hacking down the roads around the barn to visit friends and meet new people. I could trust him in the worst of conditions and one of our friends took pictures of him in her field, chronicled in Coversation Starter.

The shit hit the fan in May. Cuna was brilliant in our jumping clinic and exceptional at our dressage show. That was the last time he was sound. Again, little things weren't adding up and I blogged about it in Stuck.


After his public successes, Cuna continued to get progressively more lame despite all the management changes that were made. We made a joint appointment with his vet and farrier and took him in. It wasn't all smooth sailing. I summarized the appointment in Cuna Update.

There was nothing easy about June. Cuna was trying to get better, but it was a very long process. He made strides at first and we took his picture in Happy. Shortly after that, he regressed. I kept away from the show barn as much as possible, because it was just too hard to watch everyone else doing what I knew Cuna couldn't.


I spent in a new part of the horse industry: the racetrack. It went from a fun night out with friends to showing up to help out several times a week and get my horsey fix as noted in At the Track. At the end of the month, I made the decision to retire Cuna instead of torturing both of us over something we couldn't change in the post Towards Healing.


It started out slow. We hit record high temperatures while Cuna hung out in the shade at his new home. In The New Normal, I talk about the dealing with the emotions of letting go of a career for the horse I love the most. His shoes got pulled and he just got to be a horse with no plans or goals.

I spent increasingly more time at the track. I was having fun out of the saddle and things were going along just swimmingly until I accidentally ended up bringing a second horse home. It was the beginning of a more hopeful era summed up in The Road Goes Ever On and On.


Courage came to join us, but Cuna was still my main man. He was taking it slow in the field, which I talk about in Can't Forget Cuna.

Courage came straight off the track and started under saddle. He continued to prove that he was the second most awesome horse on the planet by going on field trips to group lessons and getting his first set of real horse shoes which he tried to eat in Taking Off the Gym Shoes. He learned important skills like eating cookies and lunging and was the first bright spot for me all summer, which I talk about in One Month of Awesome.


I was dealing with the emotions of letting Cuna retire. In Honesty, I talk about how hard it was for me when our relationship changed. Courage was helping me stay focused and upbeat. He demonstrated his road-warrior brain when he didn't even flinch about going to his first horse show in Showtime for Courage.


Based on our success there, I took him to his first ever XC clinic and wrote the Wrapup here. As long as we were out and about, I also took him to a big group lesson so we could practice having horses go by and jumps fall down. He rocked my world in Only the Best Idea Ever.

In keeping with our up tempo pace, Courage and I participated in the two point challenge. I talked about the year for Cuna and why I decided to retire him.


Courage continued to impress as he went on his first ever trail ride and acted like a total pro. Ellie came out to visit with us. She got to be in the Cuna photoshoot and she did the first ever proper pictures of Courage. 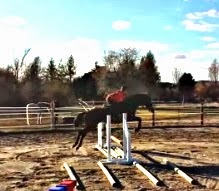 Courage got his own micklem bridle and he finally started to figure out this whole jumping thing. 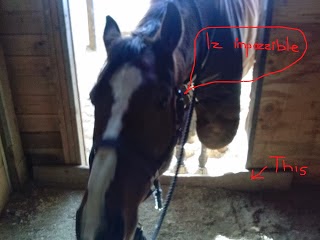 We carried on, full speed ahead! We went on another trail ride with an exciting adventure. Courage started to really get this jumping thing down. He got clipped for the first time as a sporthorse and rocked out with his stars. We also had to work through some residual groundwork issues.

We hit the lesson circuit hard at the end of the month.


December: It's been really quiet this month. We did get to ride one time. I talked about my past and why I make some of the choices I do in Amateur Hour. The boys are taking some well-deserved time off due to absolutely miserable weather that refuses to end.

It's been a wild ride! This year went absolutely nothing like I planned or expected it to. Let's face it: I started the year working full time at a show barn with Cuna all set to move up and ended the year sans barn job but with two horses.

Posted by SprinklerBandit at 6:30 AM