I knew I wanted to take Courage to a super fun out of town cross country schooling during spring break, so I thought it was in my best interests to haul him over to my eventing trainer's facility. Once a week she hosts a "grid night" that's just an inexpensive way to get horses out and jumping. Every time I planned on going, something came up.

Until last week. We were scheduled to leave for the weekend on Thursday, grid night is Wednesday... so we chucked him in the trailer and went. My thinking was that he was pretty perfect last year, so why would this year be any different?

In case you are wondering, here are some reasons why:
1) He hasn't been anywhere in three months, which makes his world very small
2) I haven't put a lot of pressure on him in that time, so his tolerance for difficult things was reduced
3) He's feeling really great physically, which makes him expressive
4) He's just plain out of practice.
5) There was a big storm system blowing in

He came out pretty quiet. I handwalked him around the arena, and he looked at things but wasn't super reactive.

He was a little vocal, but otherwise fine. I hopped on. 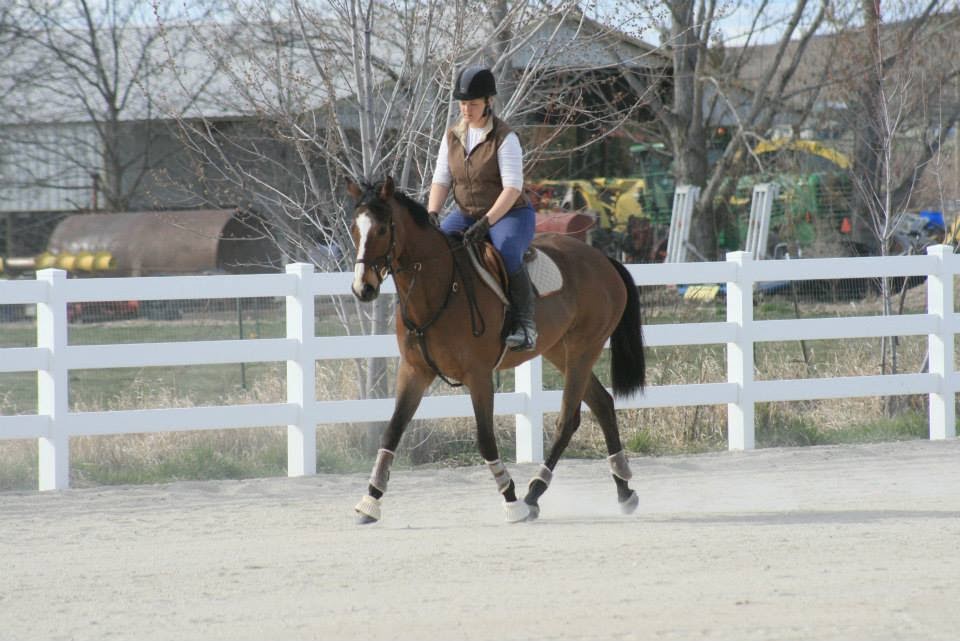 At first, all was well. We walked and trotted around and worked on settling in. It wasn't his best work ever, but I seemed to be getting his brain.

And then the wheels started coming off. He went all classic-insecure-gelding on me and started screaming for his girlfriend.

I tried to keep him focused by beginning the exercise. Just our luck, it was a ridiculous amount of poles. Sadly, we are just not the best at poles quite yet.

We walked through a couple times, then went to trot. I was hoping that the walking would help him do things calmly.


Yeah, not so much. We'd trot the first pole, then canter, then leap and flail on the way out.

I tried not to get in his face, but he was blowing through half halts and ignoring me and then pissing off if I touched his face. I tried bringing him back to walk or trot mid-poles, and that was a no go too.

I tried staying in balance over him and looping the rein and we just charged faster and nearly flailed our way into another green horse.

See, when Courage flails, his whole topline goes hollow and he tenses the bottom of his body. His ears are practically up my nose and his legs are moving like pistons that don't go anywhere.

It's not hard to stay on, but it's very hard to channel that into anything useful.

Oh, and we started screaming and panicking even more. I don't think his girlfriend was even calling back to him at this point. We were approaching full-on melt down mode. 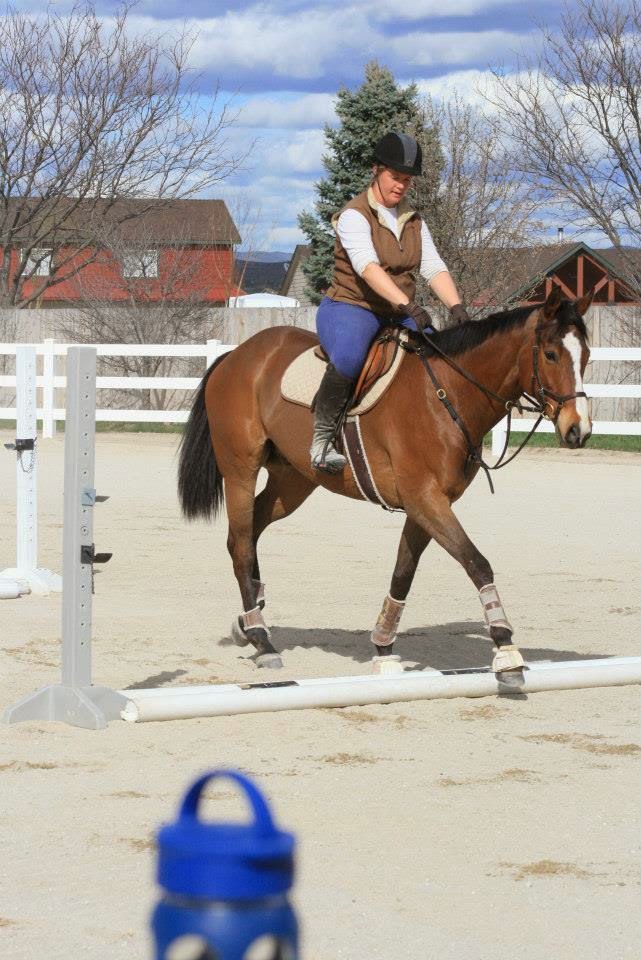 Oh goody. I don't really think it's productive to push a high-strung horse into a meltdown, because they're already reacting to pressure. Besides, I'm trying to string together calm, positive experiences to build on for the year. I don't need to teach him that traveling is scary. He seems to have a handle on that.

I broke it down for him and gave up on the exercise. We walked through the grid once in a relatively calm fashion, then moved on to something I thought he could be successful at. 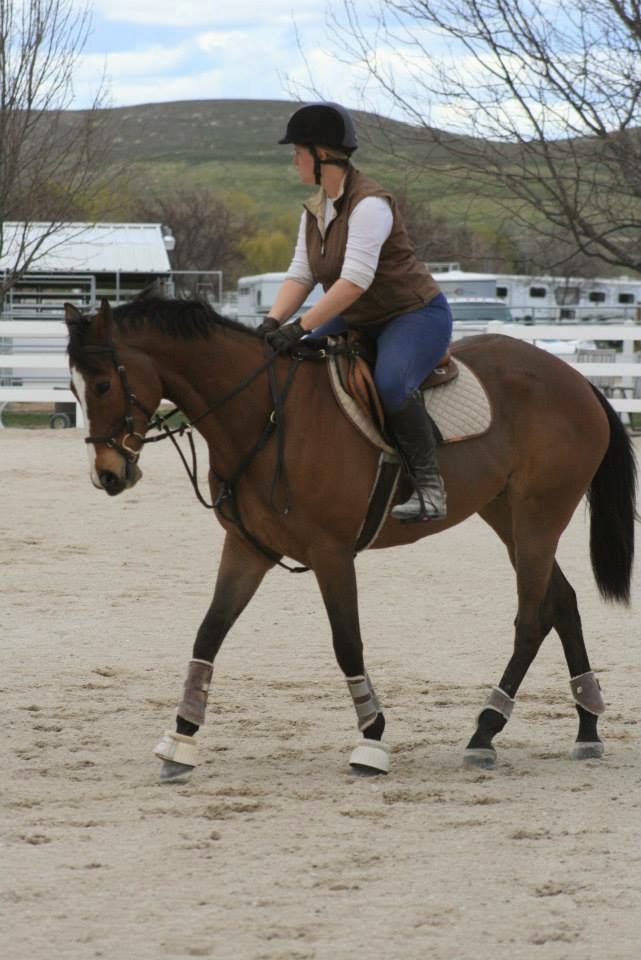 I just serpentined him around the jumps and through the poles and made him focus a bit. It wasn't that great of work. He was having trouble going forward and continued to be very tense and scream for his girlfriend.

He managed for a while, but then we started just skidding sideways and giraffing. 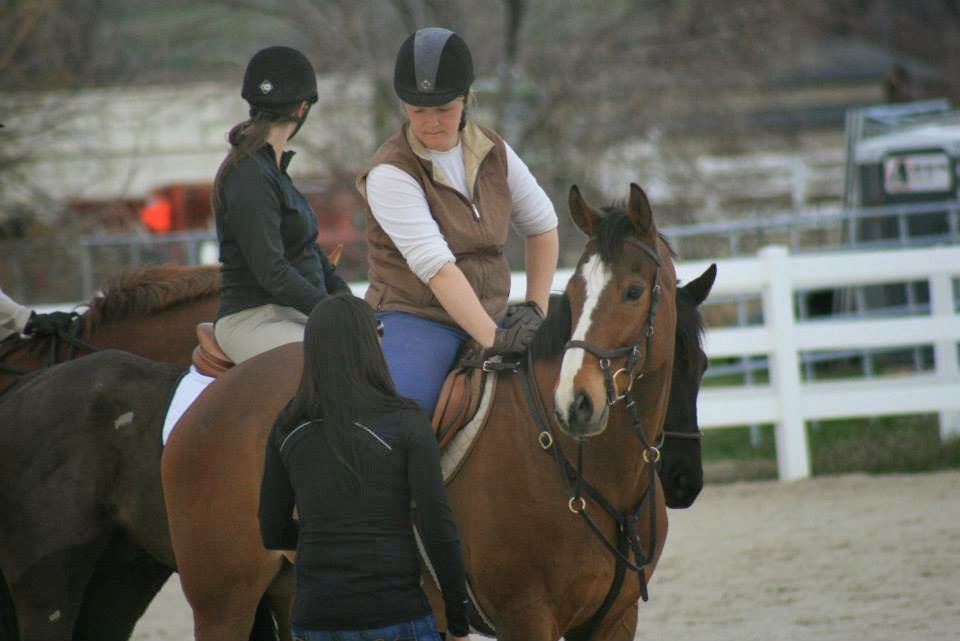 I made him do a few more figure eights and then took him to stand in the group and just chill. We chatted with friends and stood on a loose rein until the group finished. Then I hopped off and stuck him in a stall until his girlfriend finished up the next group.

And he spent the next hour and a half kicking the walls and screaming like an idiot.

Still. Despite the fact that it was all in all a pretty un-fun experience, I finally felt ready to face the year. We could do so much better and I wanted to kick both our butts into shape.

It was time to get out there and DO STUFF.

It's good I felt like that, because we were scheduled to leave the very next day...

PS Many thanks to Alyssa at Four Mares, No Money for all the lovely pictures.

PPS brace yourselves for the photo-extravaganza of awesome. SO. STOKED.
Posted by SprinklerBandit at 8:50 AM