My stated goal for this whole weekend shebang was to get epic dressage pictures (as epic as training level can be, anyways) in the field. Given that my saddle got sent away with the saddle fitter on Saturday, that seemed to be out the window.

Until Redheadlins lent us her fancy French thing. Oh my.

Courage warmed up quite nicely in the arena. I got to play with my imaginary show warm up a bit and see how he did with it.

No really. Whether it was me riding like a (training level) badass or the big, open field that let him roll forward, or the fact that he's really starting to get this dressage thing DOWN, I don't know. But it was great. Courage was balanced and listening and solid into the contact and it felt so good.


I had a half halt off my seat, I had just enough weight in my hands. I was sitting up, intermittently looking up, and having a great time.

We rolled right up in to canter, which was just so fun. Up and down the little hill and all around the field and I wanted to play flying changes SO BAD, but I don't think training level dressage horses are supposed to do jumper changes. 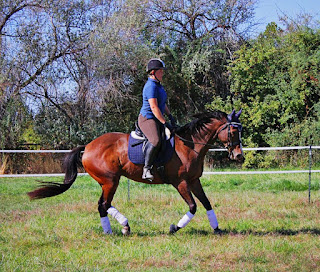 I didn't know how the right lead would go, since it's been hit-and-miss lately, but it was fantastic. I should not have worried.

We made several lovely trip around the field while I grinned like a happy idiot, which I was.

Then Redheadlins recommended that Alyssa and I canter around the field side-by-side on our OTTBs while she photographed the aftermath.

I didn't hear that sinister note when she said it the first time... haha.

Anyways. Because why the hell not, Courage and Bacon cantered around the field (on the right lead no less) and it was ridiculous.

As in, you thought I had an idiot grin before? No. Now I had a whole new level of it. For about three strides, Courage asked if we were racing. When I said no, he just cantered like a perfect riding horse and OMG guys he is just so cool. And so is Bacon, but that's Alyssa's story.

And yeah. Everyone needs solid pony friends and a perfect vacation barn, because that was way too much fun. Can't wait to do it again!

Posted by SprinklerBandit at 7:15 AM