I thought I'd blogged about this, but maybe I didn't. Anyways. In the past year, Courage has decided that he will ALWAYS ONLY EVER go in his one true love bit--a $225 sprenger that I happened to get on a great consignment sale price for $40. That was a great bargain, but I'm not paying $225 for ANOTHER bit and I'm not changing the bit back and forth every time I change bridles.

It took me six months of searching, but I finally found an appropriate knock off this summer (for like $15), and it's been great. 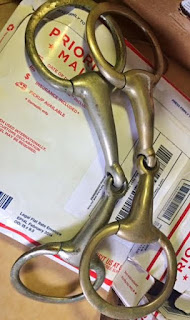 Courage had an easy week due to needing some downtime/bodywork and I was online shopping for some stuff for my trainer. One of her requests was a giant, old, heavy single-jointed snaffle. She has one that she uses for starting colts, but she's working with a horse now that is HUGE and won't fit in the normal colt bridle and really needed a 6" version of her favorite bit.

So I found it for $10 shipped online and bought it for her. The only problem was that I also found a 5" version that was also $10 shipped. 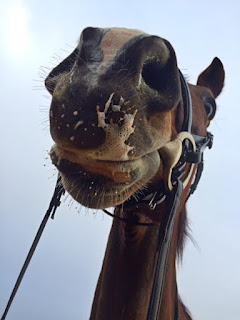 And hey, who doesn't need a colt starting bit for $10?

So I bought it and chucked it on a bridle. I hacked on the buckle in it one day and that was fine, but that proves nothing.

Then the day of our ribbon photo shoot (which was also our first post-bodywork ride), I rode in it.

And omg. I think we have a new bit. Courage has a long history of being weird about contact, opinionated about bits and nosebands, and gaping his mouth open for giggles. Or gnashing his teeth--whichever sounds fun on any given day. He has one of the driest mouths I've ever been around. It's not optimal.

I rode Courage in his usual loose cavesson with the new bit, and he trotted around sucking on that bit like it was candy. Foam flecks came out of his mouth and some even stayed on his lips.