Why I Kept Him--Getting Through Hard Things Together

As most of you know, I am the first one to jump on somebody when they start saying things like "my horse is scaring me" or "this isn't fun". I have SOOOOO been there, I know what it's like, and I am a huge advocate for having fun with horses. If it's not fun, it needs to stop.

Which brings us around to these images:

These time were not fun times, not even a little. They sucked. Most of them were this spring. I hate looking through pictures from this spring, so I threw in some sub-optimal fall shots to balance it out.
All that, and yet I didn't sell his stupid bay ass him. What gives?

(Now in fairness: I tried to send him away, but there was a problem with the trailer and it didn't work out. I did not repeat trying to send him off.) 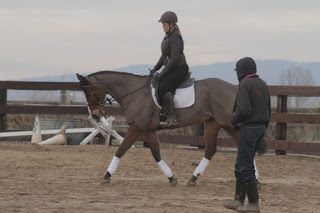 1. I was working closely with relevant professionals.

To me, this is key. When I have questions about my ability as an adult ammy or my horse's suitability for me, I need advice from people who see this sort of thing all. day. long. Support from girlfriends is nice (and I have very horse savvy girlfriends), but at the end of the day, I need objective opinions.

This spring, I was working with three relevant instructors whose opinions I value. Two said "wait and see" and one said "oh hell you can do this. Get on."

This one is a bit harder to gut check just because until you've been terrified, it's hard to say what that's going to look like for you. As I previously had a terrifying horse, I can 100% tell you what that feels like. Courage's antics weren't fun for me. I was furious with him, deeply disappointed, hurt, whatever you want to say. I certainly didn't like bolting sideways and not getting on trailers, but those things don't give me that sick feeling in the pit of my stomach the way say, rearing as high as you can on the edge of a cliff in the mountains did. And no, you don't want to try that one. It's worse than it sounds.

3. I had a support system that believed in us.

Here's where those girlfriends come in. (And the fact that they're horse savvy matters). Redheadlins and Alyssa have actually known Courage longer than I have. Actually, I think Alyssa has known him longer than she's known me. Crazy world. Anyways. They both knew his brain and my abilities, and while they were clear that no one was mad if I wanted to move on, they thought I could do it.

I always tell people that I have to have attractive horses so that on the inevitable day when I want to shoot them (hey, this is Idaho), there is a reason that I don't.

If some ugly POS horse pulled all the stunts that Courage did this spring, it would have been gone. Courage has a cute face coupled with a HOT DAMN styled body, which reminded me that there was a reason to keep pushing on.

Those reasons were enough for me to stick it out, but I also made a plan and stuck to it. I decided what my goals were with Courage and I worked to pursue those goals every single day--everything from "jump without fear over whatever I want" to "hack on the buckle around the farm". I think I set a timeline for Courage, too--the usual "if I'm not having fun by X date" sort of thing.
I don't remember what date I set anymore. Courage and I got out there and did stuff together and even though it was rough going at first (yes, we did get 120 time penalties in our first event derby along with two refusals), we pushed through.

I'll be the first to admit that I form bonds with people or animals slowly and with my eyes open. Courage and I have had a lot of ups and downs, but I am so glad I have this little guy in my life. I had to make good choices and live through a lot of not-fun things this spring. Now we've come out on the other side and I have a really cool, really attractive little bay horse who works for me.

I know we'll have more rough patches--that's life with horses--but I'm confident we can deal with them. Together. 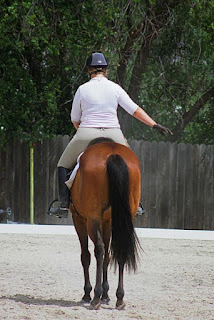 Posted by SprinklerBandit at 7:39 AM