Back in October, Courage was rocking the wooly winter coat, while the temps were still in the 80s during the day. That was obviously stupid, so I did a quick chaser clip on him. It's since mostly grown back in, but I swore up and down that I would wait until January to clip him again and thus skate by with two clips this year.

Then the weather warmed up from 20f to 40f, ice turned into wet, and I had to chip dried mud off the most sensitive princess horse before a ride. Do you know how many times you can do that in a winter?

Plus I was trying to photograph something shiny and the fuzzy look just wasn't doing it for me.

So I busted out the big clippers, told C he'd have to learn to deal, and went to town.

Despite my better efforts, we ran out of daylight after I did about 1.25 sides of him. It's really quite impossible to clip in the dark with no good lights and no real crossties. Sigh.

I finished him the next day.

I went with a full clip minus head and legs (again) (even though I HATE fuzzy heads) because while Courage is in hard enough work to justify taking all the hair off and I do have the blankets to support this plan of action (on two horses, even!), it just doesn't make sense to strip him totally bald.

Mostly because I did his legs one time and it cause us both to fly into a murderous rage. And while I can clip his ears, they pretty much have the same effect. And if you clip the head and not the ears, that's just gross. Of course, not clipping the head is gross too...

At any rate. The first two winters he was with me, I clipped stars on him.

And then while doing some research this winter, I discovered that someone had stolen pictures off my blog of him and put them on pinterest.

An OTTB wears a Clydesdale costume and the thing you notice is the rather-subdued clip? #lifefail there photo-stealing Pinterest weirdo.

Then earlier this year I did hearts because I'm not cool enough to freehand stars on an impulse clip. Little girls loved it, but it wasn't quite my thing. I may be all about the glitter, but hearts? Meh. 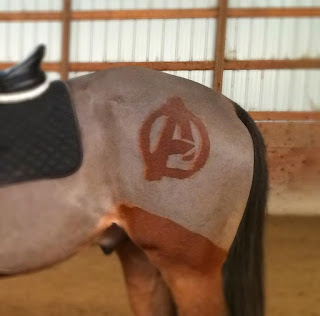 SO I DID THIS:

Ahem. For those of you less-nerds out there (you're reading a niche blog, so non-nerd isn't an option unless you're my mother), that's the Marvel Avengers logo. Best Franchise. 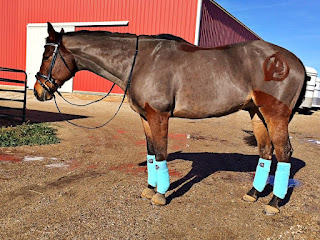 That's clip #2 in the books for this winter. I am loving the lack of long hair. Lil bit less loving realizing that most of his neck thickness was hair, but ah well. Can't deny he's looking damn good.

Like a super hero. (cough if said hero was super gay and rocked the bling).