On Jumping (or rather, not)

As I'm sure all of you have noticed, I really don't jump my horse anymore, which is weird considering the whole plan was to do jumpers together. 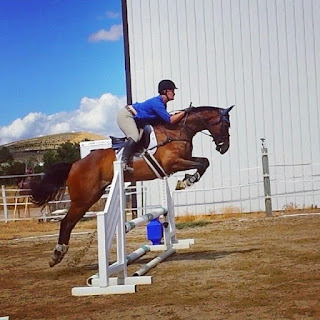 I must be crazy not to jump him, right?

I wish it was that simple. I was trying to explain it to Alyssa the other day and it goes kind of like this:

Courage is an incredibly brave and honest jumper. He's not a stopper. He doesn't really rush, he won't charge off after, he doesn't generally buck, leap, rear, or fart around. If he jumps you out of the tack, he just canters in a straight line until you haul your sorry ass back into the saddle. He's not dirty.

Like... what idiot wouldn't jump this clearly talented and awesome horse?

Because that's not all there is to it. I mean, yeah, he requires a VERY specific ride. You will get your ass OUT of the tack and you will HURL your release at his mouth, or you will have a massive problem exploding directly under you. It's a bit unnerving for my eventer-background self who's used to being a little behind the motion for security's sake, but since he WANTS that ride and really doesn't stop, it's actually quite safe. I can deal with that.
But there's more.

This part is harder to articulate. I didn't realize what it was at first, because I've done 99% of the rides on Courage and I haven't been riding a lot of other horses in the time I've had him, so it was very hard to contextualize. Courage is an older horse (10) who's been ridden all his life. He's very opinionated and he knows what he wants.

He's too green over fences to really know where you ought to be, so sometimes he puts you in the wrong place, which puts him in the wrong place, which he then thinks is your fault. Oops. That's why last summer we spent a long time lunging him over fences--he had to learn how to jump on his own, because he really couldn't with a rider up. He wouldn't listen to the rider (no matter who) and then he'd interpret jumping problems as "ABANDON SHIP", which is no good.
So it's really weird--on the one hand, he has good technique and an attractive jump with no actual vices. On the other hand, no one who jumps him is like "that was fun, I want to do it again". Honestly, I really believe the reason he hasn't developed a stopping/rushing/bucking problem is precisely because of how careful his formative jump training has been.

He is a really attractive jumper with a lot of talent. He's super scopey and fun to be around on the ground. He's really turning in to a fun horse to ride on the flat. Part of our dressage foray is simply to get him more broke to ride. Maybe, just maybe, I can get him to be ride-able enough that we can make jumping fun for both of us.

It's not completely crazy--late this fall, we jumped two courses over 2' fences with like, brakes, steering, and actual control. It was super fun.
I'm very serious about my bronze medal in dressage goal and most of the time, that makes up for not jumping. Sometimes (like writing this post and looking at these pictures and any time I see a jump set up), I want to jump SO BAD RIGHT NOW OMG OMG OMG.

I keep reminding myself that maybe we can. Next year. Sometime. Maybe. Until then, I've got to get this horse broke.
Posted by SprinklerBandit at 7:00 AM