Some of you set monthly goals, and I think that's cool. I set annual goals, because that's about all I can keep up with. It's late enough in the year and we have nothing else planned in the way of clinics or shows or accomplishments, so let's take a look at the goals I set for this year and how we measured up.

1) Compete at two dressage shows (schooling shows count) with Courage. Me riding. Don't care what level. Complete test and stay in the ring.

SUCCESS!! We knocked this one out of the park, I think. We did the schooling dressage show, the GMO rated dressage show, and then at least 1-2 more schooling shows. As of this writing, we have completed 6 different USDF tests in the show arena this year. Damn son. That is a lot of memorizing.\\ 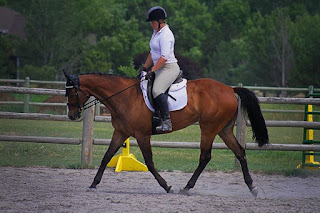 2) Attend two jumping shows with Courage. Don't have to compete. Do have to hack around warm up.

Oh you BET YOUR ASS I'm counting this. We did 3 (count 'em) event derbies. I do not even care that they were over ground poles. I rode in jump tack and it was in a field. Success.


3) Comfortably jump around a 2'6" course at home, including oxers and spooky fill.

This did not happen. We did haul to our old barn and jump around a 2' course with oxers and fill (or maybe just fill) at the end of the summer, so that's like 50% success, right? I give myself half credit. 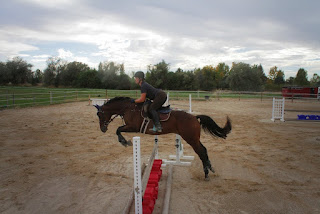 Nope. Did not happen. This goal was contingent on #3 being a thing and while a very big part of me wants to set a grid in the indoor just so we can say we did this, that's probably not a responsible idea. The point isn't to do it once and be terrified--the point was to develop consistency and push ourselves. We did that, but not with fences.

5) Get out on the trails. Courage is brave and willing. I want him comfortable solo and in groups.

Big, fat fail on this one. My barn is land locked and I don't have a trailer. We tried to schedule trail rides twice, but neither one worked out for various reasons. I do need to be more consistent about this--I like horses to understand it's a big world so that the little sandbox never looks like it's going to eat them. This needs to be improved.

We did hack in the fields a lot this summer and Courage learned to walk over the tiny ditch without running backwards and spinning, but that doesn't really count.

6) Ride bitless. I dunno. Just want to try it and have an english hackmore, so might as well.

CHECK. This we did a few times. Nothing too exciting, but that's the point. We toodled and it was fun. We used the mechancial hack I bought for no reason and had a good time. 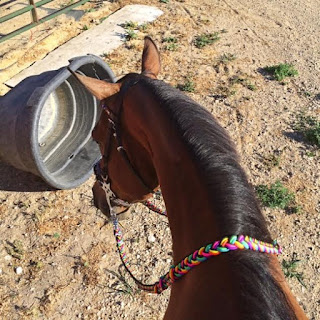 7) Take 1-2 lessons a month so I'm not just stalling out without help.

SUCCESS. This has been a game changer for us this year. I am really, really good at doing homework, but I need consistent eyes on the ground to tell me what homework to do as I learn a whole new feel for a whole new discipline. 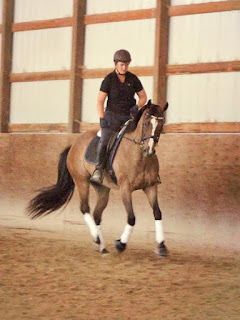 8) Travel to one out of state show to see either upper level eventing or grand prix showjumping.

SUCCESS!! I attended the Evergreen Classic to watch Grand Prix jumpers with a friend and it was super fun. This is definitely something I want to build on in the future--high performance in any discipline is inspiring.

9) Jump double clear around a stadium course at 2' or better in a show.

No. We re-directed mid year sometime and decided to be dressage queens instead of jumpers/eventers. If you look at #3, you'll realize that we jumped around a 2' course at "not our home barn", but it had very little in common with a show. This didn't happen and won't happen this year.

10) Score 65% or better on a training level dressage test.

SUCCESS!! We rocked a 67% on training 2 at the GMO-recognized show and equaled that on training 3 at our last schooling show (which was also our first attempt at training 3). 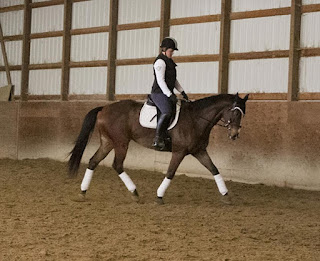 11) Ride in either of the H/J shows at the end of the summer.

Fail. In fairness, I was helping organize these shows and the second one that we might have been ready to hack around at was the same weekend as our last event derby. I couldn't do everything, so I opted to not do this.
Thoughts

I'm beginning to wonder if any year goes the way we think it will--I started the year as a jumper rider looking to do a little dressage and ended it as a dressage rider who likes to jump a little on the side. I'm really looking forward to setting next year's goals--dressage is a whole new world for us and there are some exciting opportunities I want to pursue.

Looking back, this year had some very high highs and some very low lows. I was THISCLOSE to selling Courage in May, but we got it together and went on to win the first tri color of my riding career. On paper, we may not be the most successful team out there, but our progress was huge on a personal level.