Because Courage is eh, let's say "pressure adverse", we spent all of last fall/winter/spring until last week just going as slowly and methodically as possible through the babiest basics of training level. 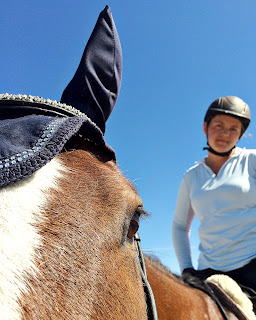 We spent six weeks WALKING this winter. Free walk, medium walk. Rinse. Repeat. FOR SIX WEEKS. And yes, I ride like 5-6 days a week. In case you're keeping track, that is a SHIT TON of walking. Oh and. We went like 2-3 MONTHS without cantering. Because someone couldn't deal. So we didn't deal. We walked and walked and walked and when we FINALLY could, we started trotting.
Whee! Trotting is so exciting.

Too exciting, it would seem. Courage is completely re-learning how to use his body. That's a good thing, but it's also an explosive thing. And it causes pressure. And remember, he is "pressure adverse".

Sooooooo even when we adding trotting back in, we kept the trotting slow. We rode under the rhythm for weeks. MONTHS. So slow. Lots and lots and lots of bending. Transitions. We never rode a straight line. Circles. Bending. Downward transition. Bending. MOAR BENDING. COUNTER BENDING. ALL THE BENDING.

Most of this was in the indoor, which was good because it's tiny and makes the under-the-rhythm thing feel less pained than it really is. But then we moved to the outdoor and I tried to do bending AND forward.

That was a flail.

Truly, this is what makes Courage so hard to ride. He's obviously capable. I'm not stupid--I can watch our videos and say "wow, he's not really using his back or going forward and once he's forward a lot of the connection problems will take care of themselves", but the ability to recognize that isn't the hard part.

The hard part is explaining it to Courage at a speed he's comfortable with.

Which is slower. MOAR SLOWER. YOU SLOW DOWN. NOW GO SLOWER.

I was really excited when we finally got to work on lengthen trot in a lesson. I was less excited when it was pointed out to me that the lengthening we got was basically just the working trot I need. For like. Training level. Which is not the level we are trying to get to. 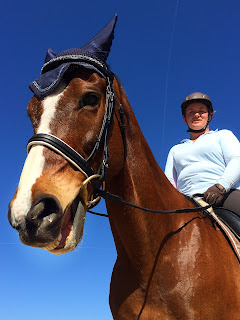 But instead of curling up in a ball and deciding to give up on this whole dressage thing (while keeping the precious, of course), I've been asking for just a little bit more. After all, we've done MONTHS of basics, right? Maybe Courage is ready for just a leeeeeeeeettle push?

Redheadlins came out this past Saturday and took some video for us. It's mega boring (look! SB is trotting in a circle!), so you can watch it here and here if you want, or just look at the screen shots below, which is what I would do.

What I liked was that I finally rode Courage forward and he dealt with it.

What I disliked was that I threw any sort of "roundness" or "connection" out the window. I mean, it was the expedient choice at the time. I know that if I throw too many new things in Courage's face at one time, he won't deal with it.

But is it so bad to want to look at a picture of us and be like "yeah that chick looks like she doesn't always suck" instead of just apologizing for all the things I know I'm doing wrong but can't fix right now?

Jury is out on that one.

Then Redheadlins came out again Sunday. I had watched our videos and I decided that if I had to let go of the forward thing, I would, but I need to step back a little and really just focus on getting a little roundness. (DQ alert: yes, I know you can't be "round" without being "forward", but until C learns the training scale, I will keep doing "a little bit of this/a little bit of that" and finessing and trying not to die.)

So anyways. Project Keep CRage From Sticking His Nose Out Like a Pony happened Sunday. He was tired. I was tired.  We started slow. We discussed my aids and how he would respond to them. 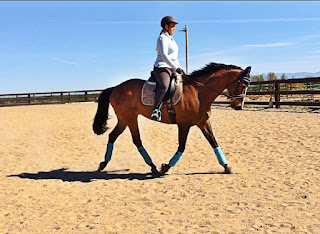 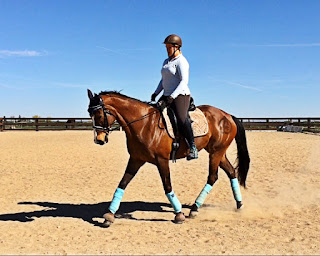 BAM. (Yeah I know--I finally have a normal trotting picture BUT YOU HAVE NO IDEA HOW LONG IT TOOK TO GET HERE.)

I was so pleased. Courage not only acquiesced to trotting like a grow-up horse, but also when I asked for a lengthening, it happened.

It's not automatic and there's always room to improve. I'm not apologizing. This was a damn good ride for us and I am so proud of how far C-Rage had to come to have this ride.

If you watch our (also mega boring) videos (here and here), you will see that we spent a large percentage of the ride working in the canter. And that the canter is kinda yuck. I am also not apologizing for that.

I mean. We spent literal months not cantering this winter and finally now in mid-ish April, Courage is in a place where we can start working on the canter without him trying to leave. It took us that long to get here. Now we can get started. That's good enough for me. 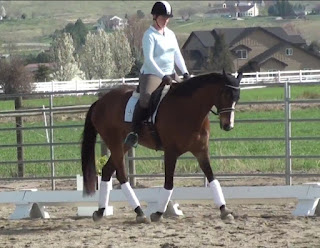 We can skate by in training level sorta. I don't know if I can get his canter to a place that it makes sense to show in first level by next month. Maybe. Maybe not. Maybe we're doing another year at training level while I get this sorted out.

But maybe the road to first level is finally starting to look like something we can accomplish.

And THAT is really exciting.
Posted by SprinklerBandit at 7:00 AM