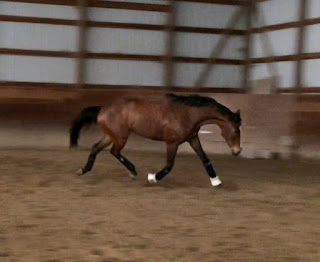 It's tempting to cherry pick good screenshots right now and pretend everything is rolling along fine, but it's not. Last week, my somewhat-icky rides progressed to "might as well not bother" levels of ick rides. I knew that Courage was WAY overdue for bodywork, so I just stopped riding until he could get an appointment.
But that wasn't magic. Courage's body felt better, sure, but he was just.not.cooperating. Like. Forget recognized first level this year. We won't make it around training level at a schooling show right now. It's bad. Doesn't matter if I ride my butt off. Courage is not going to play.

I do know that my best attribute with this horse is that I have a really good feel for what he needs in a given moment (not just arrogance--verbatim quote from a respected clinician regarding our partnership). Instead of feeling burned out by what looks like a disappointing failure to reach a goal of over a year, I choose to focus on the horse I have right now.
I'm pursuing some other avenues this week to see if I can find a root cause for the yucks or if Courage has decided just not to play for the present. In the interim, we're trying other stuff.
You know. Like when it drops 40 degrees Fahrenheit and blows in a storm overnight, so I decide it's a great idea to start riding Courage in a hackmore with zero stopping power. Yes, on the same day I took all the leaping pictures. I'm not just crazy--I knew Courage needed some play time, and once he played, I just kinda knew he was going to be fine. It was actually very interesting--Courage has been hollowing and inverting and fighting me with the bit. Take that away and after we got past his initial "um wtf lady" response, he was fine. Nose poked out like a hunter, yes, but poll a little below his wither with lots of licking and chewing. I let him worry about him and I focused on re-training myself to ride completely from my body (and turn right).

It wasn't magical either. We didn't even trot. But hey. I'm of the opinion that horse training is less rainbows and pixie dust and more wet saddle pads and putting in the time anyways. 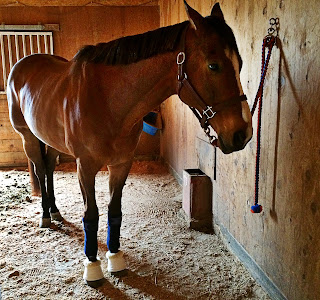 That's where we're at. It's not pretty. It's not very good. It's definitely not linear.

But I'm enjoying having a horse I can hop on and do dumb stuff with on a cold spring day and not feel like I'm going to die. If the rest comes later, great.
Posted by SprinklerBandit at 7:00 AM