Teach Me Tuesday: Outside Aids 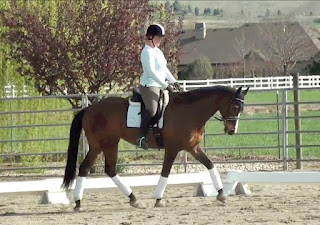 As I suspect y'all have figured out, Courage and I compete in dressage. (Omg I can actually say that and be like IN FACT YES WE GO TO SHOWS. Cool.) Anyways. There is no spectator assistance allowed, though at the lower levels you are allowed to have a test reader in non-championship classes.

Until this year, I'd never used one. I mean, the tests are published MONTHS (if not years) in advance of the shows and you know what tests you're doing going in and I used to think there was NO EXCUSE for having someone read something you OUGHT to have memorized. It's not like a jumper course where you get to learn on the go. It's literally available for free online for THREE YEARS.

But then there was all the chaos at the show and I only sorta half knew one of my tests and the other one not at all and THEN I found out that I'd been told I'd ride the tests in one order but not was riding them in the other order and so the test I memorized was now second and I had like 38 seconds to learn the test I hadn't memorized and CUE PANIC. 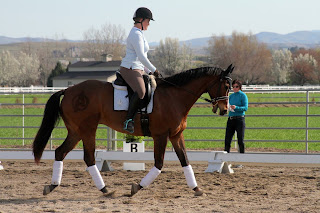 And then this lovely lady offered to read for me. (And they let me ride the tests in the original order, phew).

That was really helpful. It was our first out of the year and I was so focused on giving Courage a tactful ride that it was really, really nice to have that little extra check on where I was going.

I'm still too proud to use a reader all the time, but what a relief it was that day.

So how do you feel about "outside assistance" in your chosen discipline? Do you take advantage? Frown on it? Try to get your competitors disqualified?
Posted by SprinklerBandit at 7:00 AM