I'm skeptical about alternative therapy for horses. I think new technology is super cool and I love living in the future, but I also think it's dumb to spend money on untested tech that may or may not do anything.

Good news: my bodywork lady totally gets that.

Bodywork lady also runs an equine rehab center and she usually lets us play with the new toys when they come in to see if it's something we're interested in doing on our horses. Courage has gotten laser treatment and ultrasound stuff, I gave Alyssa  Courage's turn on a Theraplate to see what happens (answer: made her nauseous), and I think we've done a couple other things. To this point, I haven't noticed that anything outside of the usual hands-on body manipulation was doing anything for Courage.

And then bodywork lady shows up with a thing called a "magna wave". It looked like a glorified hose lasso attached to a suitcase or tiny R2D2 droid and it popped like an electric fence. It has little wheels on the body so it's easy to move and it plugs into a normal outlet, so pretty straightforward. (research tells me this is the Maxx model).

Given Courage's extreme reactions to ropes/hoses (DO NOT LIKE) and hearty respect for electric fence (won't step over a single strand 1' off the ground), I figured this would be another failed experiment where I might get some good NOPE pictures but would achieve nothing useful.

Bodywork lady walked into his stall with the weird heavy popping droid suitcase hose thingy. I was SHOCKED that Courage gave it minor side eye, then was 100% ok without even moving his feet.

And then I was completely floored. 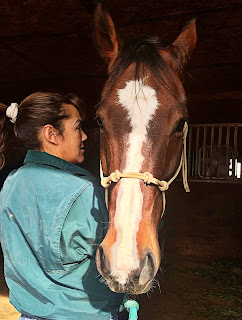 Not only did he like the treatment (I'd already tried it on myself--feels weird, doesn't hurt, did feel good after), he literally dropped his head below his poll and completely relaxed his entire body. Apparently, the machine/hose combo uses electro-magnetic pulses to essentially give a deep tissue massage. I don't know how I feel about any of those words in particular, but the change in Courage was remarkable.

This is the horse who leaps around, rears, paws the air, bolts away, and generally has a meltdown in his overreactions to pain when we do bodywork. He relaxes afterwards when he feels better, but it's borderline dangerous (at best) for myself or our practitioner and I never feel comfortable asking someone to hold him for me.

After a nice long session with the Magna Wave, Courage stood there like a sleepy old school horse, eyes closed, ears floppy, poll below his withers, and was completely passive and cooperative for the entire length of the adjustment.

Which was less than a third the normal amount of time because there were no flying hooves to dodge or trooping around the barn trying to catch him after yet another escapade. (Yeah he possibly has a reputation...)

Courage is a special snowflake for sure and I try to do anything I can to keep people around him safe and happy. This was worth it for the increase in personal safety for myself and our bodyworker alone. I mean, we both kept repeating "I don't even recognize him" and "do you think we killed him"? I also asked her if I could get my own, and she said sure but pointed out they cost a tidy 20k so yeah, not happening here.

Per our bodywork lady, you can actually get on and ride immediately vs the usual 24-48 hours off after stuff like this, but I had somewhere to be so I didn't get to see the after-effects until I pulled him out the next day.

I threw him on the lunge line and then scraped my jaw off the floor--dayum.

Homeboy floated around like I've never seen him move. I ended up not riding, because he also felt super good, which entailed grunting oddly every few strides and periodically leaving the ground ways I just didn't care to ride.

He wasn't naughty or bolting or any number of previous lunge line shenanigans. He just looked like he felt amazing and he was expressing himself. Nothing was sustained or idiotic.

Even without the after pictures though, I'm a believer. The change in him was mind blowing for me and regardless of how well it holds long term, the sheer fact that he was able to let us work on him without the big reactions makes it worthwhile to me at this point. I will say I watched our lady use it on several horses and there were a variety of responses, but for Courage and one of his girlfriends, this nifty tool could be a game changer.

10/10 will use again. Definitely recommend.
Posted by SprinklerBandit at 7:00 AM