It's thinking about being nice outside. It was actually 40f when I got up this morning, so the ice is melting and the arena started thawing. I checked Cathy's outdoor arena this morning, and it was probably ok if I was desperate, but between strong winds and having a nice, wind-free indoor just next door, we made another trip to the doom bubble. It's not as threatening as it used to be.

And yes, I will try to take pictures tomorrow and get them posted by the end of the week. It is unfair for me to sit here and describe it without visual accompaniment.

I was hoping to expand on what Izzy and I worked on yesterday, but we had a new challenge to deal with. Our usual riding buddy couldn't make it. Cathy brought a horse over to lunge, but Izzy had to deal with that horse leaving. Yeah. Pretty dramatic. I consider it good practice for an imaginary time in the future where we do big, fancy shows. In general, I was impressed by Izzy's response. The other horse left, and she panicked a little bit. I kept her going forward on the lunge, and within two circles, she was pretty much back to listening to me.

Then another girl came in to ride a strange horse (well, strange to us. It's her normal horse). It was fun to watch, because she rides at a much higher level than Izzy and I are capable of right now. We worked on circling, staying out of the way, and not trying to kick the expensive horse when it went by. In addition to paying attention to my seat bones, I tried to keep Izzy's neck straight and influence her balance and direction by shifting my weight. Overall, she was good. We'll hopefully be participating in another dressage clinic at the end of this month or next month, depending on how the scheduling works out. I'm looking forward to that.

In the mean time, here's a little visual history for you.

This is Izzy on one of our first few rides ever. 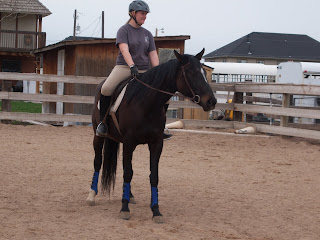 And here she is a couple months ago: (pre-new bridle and indoor arena). 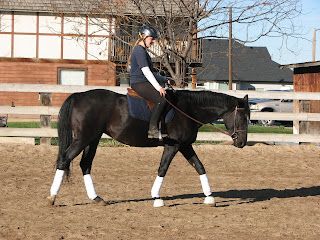 I will work on getting pictures of the indoor arena and us in it, but that depends on having a camera person, and those are hard to come by when it's freezing cold outside. Oh well. Maybe I'll just do a walking tour or something.
Posted by SprinklerBandit at 12:22 PM