Yesterday was a crappy, windy, cold day, but it was above freezing and it had been blowing for two days straight, so the outdoor arena was sort of dry enough to ride in. It's is an amazing opportunity to have access to an indoor, but I sure love being outside.

Anyways. I rode Izzy after turning her out to run in the arena, and she was pretty naughty. She would have been better if I cold have done a bunch of transitions and made her focus, but the footing wasn't that good. I only rode for ten or fifteen minutes, then I out her away.

Finally, I was able to get my old girl out. (I say "my", but she's really not mine, except in our hearts.) She doesn't do the indoor, so I haven't been able to do much with her in the past couple months. I also turned her loose in the arena, then groomed her thoroughly and got on.

She is such a good girl. She isn't as forward into the contact as Izzy. She'll never be a dressage champion. She is, however, smart, sensitive, and athletic. Despite the fact that I hadn't ridden her in a month or two, she still moved forward perfectly off my legs, and stayed balanced under my weight. She's so sensitive that I can just think about halting, and we do.

If I had more money, I think I'd try to do lower-level reining with her. She's catty and sensitive and doesn't like much rein contact. I think she'd love it, and it's probably lower-impact on her joints than jumping or dressage. Unfortunately for her, I don't even know how to put a western saddle on, and I don't think I know anyone who ride western well enough to train her. Oh well. Maybe I'll get a book and see what we can do. She'd probably do fine in a western bridle, but I guess we'll stick to my ansur, so it would be a fun picture.

So, anyone know a good reining training book? 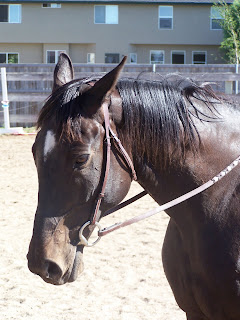 This is Cassie, my old girl, a couple summers ago.
Posted by SprinklerBandit at 8:42 AM