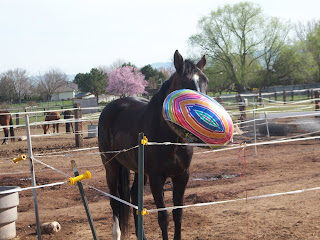 Yep. Irie's mom brought out balloons. This one is shiny and plays a song when it makes contact with anything. Izzy quickly overcame her fear of it when it was tied above her breakfast. She even played with it a little bit. I'd say it needs more work, but it's definitely a good start. 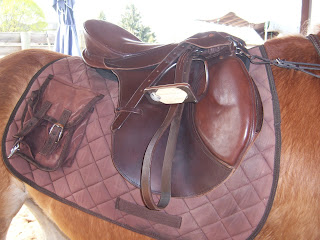 Also, Irie's mom just got her fancy Ansur KonKlusion. It's way newer and nicer than mine and she loves it very much. Yeah... I'm super jealous. I'm thrilled that we were able to get a jumping saddle at all, but someday, I want a pretty, new-ish one. Still, hers has way bigger knee blocks and some thigh blocks. I keep telling myself that I wouldn't like that. I haven't sat in it because I'm not allowing myself to like it. I can't afford to. 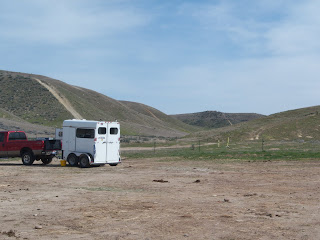 Note: This is not our trailer in the picture. This is the trailhead we went to today. It's in the foothills just outside of Boise and it's pretty cool. The hills are great for the horses. They develop muscles going up and down them and they learn where to put their feet and how to balance themselves. Also, it's pretty awesome.

Izzy did ok for her first time out this year. She definitely remembered some of the stuff she learned last year (like about not running down hills, thank god). She also forgot some things, like how this is fun. We were up on top of a ridge and came across a mud puddle. Irie's mom was making him go through it, so we waited for her. I didn't bother trying to get Izzy through it; there was lots of space to go around and I wasn't ready for a fight the first time out. Izzy had a mini meltdown because she didn't want to stand still. I made her walk away from Irie, and that was pretty terrifying too. Fortunately, we resolved the problem by Irie going through the puddle and rejoining us.

The trail seemed to be going on forever, so we found a short cut back (on an actual trail; it's ok). It went down a pretty steep hill and Izzy didn't think she could do it. I'd try to ask her to go down and she'd just freeze up. Finally, she realized that Irie and his mom were doing cutbacks across the hill, which is what I was asking her to do. Oh. She can do that. So we did.

My favorite moment had to be when a whole group (covey?) of sage grouse EXPLODED under neath Irie and directly in front of Izzy. He bolted forward, but Izzy just froze up. She's really not a spooker. I like that about her.

We met a fellow eventer out exercising her horse, which was fun . I'll have to watch for her at shows (and maybe look her up on facebook--does that seem creepy?). We stuck to walking this time out because Izzy was on edge and I didn't want to tempt fate. Next time we'll go out the sandy way and do some trot and canter. It should be awesome. 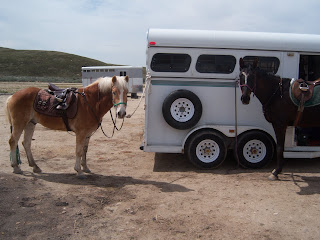 Faithful trail buddies. Only they can't stand next to each other because Izzy tries to kick him.

Last year, Izzy was fine on trails as long as I just stuck her nose in Irie's tail. Today, I guess she thought he was walking too slowly, because she kept trying to nip his bum as he went along. Poor pony boy. I managed to stop her most of the time... 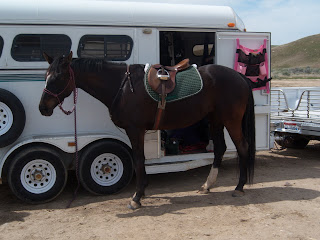 A close up of Izzy pretending to be a trail horse. The eventer lady thought Izzy was a thoroughbred. Yay! (I think.) She looked super cute with her bridle (minus a cavesson) on over the top of her rope halter. I'll have to get a picture of the whole getup next time.

All in all, a very good day.
Posted by SprinklerBandit at 4:57 PM