Nothing like a missed day riding to inspire general pony angst. I'm reading reviews and shopping for shimable sheepskin pads so I can find something pretty and fluffy to use instead of our current boring pad situation. Need a touch of front lift to make room for Izzy's sensitive shoulders.
The problem, of course, is that everything I'm looking at is in the $200-$300 range, which I could do if I had to, but makes absolutely zero sense to do when I already have something that works and I have no idea if that option would.
Instead of general whining, I'll do a March Goals wrap up and Set some April goals.
1) Sitting trot. Again, every time I ride. At least on circuit of the arena each way. Begin to work towards trot/canter/trot transitions in sitting trot.
Shortly after setting this goal, I realized that the absolute last thing Izzy needed while dealing with back problems was some n00b bouncing around on her. I discarded it within a week.
2) Get Izzy FORWARD from the leg. For serious. Lots of transitions and study. Make this happen.
Somewhat... we have had some lovely forward days, but most days she just starts out lazy and sticky. I am encouraged by her willingness to work through her back in the new saddle, so hopefully we can make more progress on this in April.
3) Completely re-evaluate Izzy's current feed and make changes as needed.
3b) Have Toni out again to work on Izzy and see what progress we can make.
DONE! Izzy is now on 24/7 turnout getting a grass/alfalfa mix twice a day. She gets about a quart of Triple Crown 30% topped off with ulcer meds and bioflax20. I have her on a multivitamin at least until it runs out. We didn't make any progress with Toni, but I suspect that's because we were looking at hormonal issues.
4) Take a lesson. Probably dressage.
FAIL. I am trying to plan one, but schedules are not matching up.
Not the world's most successful month, but I feel a little bit better about where Izzy's at physically and it's given me ideas to work with if the problem crops up again this month, which is possible.
April Goals:
1) FORWARD. Read it. Do it. Live it. Until we have forward, we have nothing. One blog post a week addressing how I am researching and applying forward to our world.
2) Cycle back into jumping. The first event derby is in May, so I need to get Izzy and myself comfortable doing 2'3"ish stuff, since our goal is intro beginner novice. (Lame, but I'm chicken.)
3) Take a lesson in dressage. 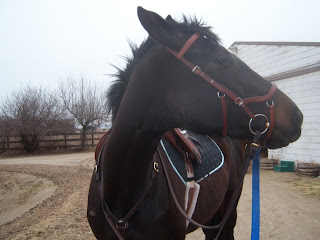 That should be enough. We're keeping it simple and achievable.
Wondermare has approved this goal list only under the influence of a lot of cookies.
Posted by SprinklerBandit at 8:40 AM