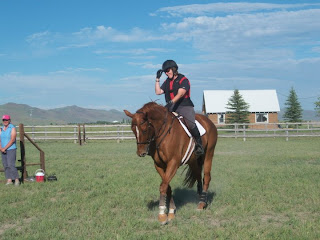 Meet Trep. He's the giant chestnut gelding in the barn who is not Cuna. You can easily tell them apart--Cuna meets you at the front of his stall looking for cookies. Trep you go find in the back of his run while dodging hooves and teeth.
He is the definition of a mean bastard.
Don't mistake me. Trep is treasured by his owner because he is an amazing riding horse and as such, he has every possible spectrum of vet care to make him as comfortable as is possible for an equine to be.
It's not a pain issue--it's just Trep. He's cranky on the ground and we deal with it.
One of the ways of dealing with it is carefully managing his social interactions. When new people are in the barn, we ALWAYS warn them not to pet him or feed him treats. He isn't a "bad guy", but if he looks like he's going to hurt you, he will. We don't make a joke of it and we're not teasing.
More than 50 percent of the time when I give that warning, the warned person IMMEDIATELY becomes attracted to Trep by some sort of giant magnet. They feel the need to expose to him their soft tissue and appendages while wrapping their arms around his head or neck.
Seriously. It's weird. He's not misunderstood. He's not mistreated. He's not looking for a sugar mommy. He's definitely not poorly treated.
I warn people for their own good and they ignore me. They ignore his owner. They ignore his trainer.
Wtf, people. Do you have a deathwish? 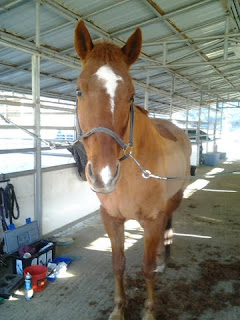 My only solution is to pick the calmest, nicest horse in the barn and start a story about him. "This is Cuna. He's a mean ass bastard horse. Stay away from him or you might get singed from his fire breathing nostils." If I said that, you probably couldn't pry the women off him.
Posted by SprinklerBandit at 2:36 PM