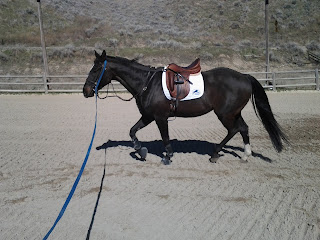 I may have mentioned that we have very cool, very expensive dressage saddles here on trial. I rode in one on Cuna, but it was not super fun just because he so isn't a dressage horse. I've been itching to put the pretty one on Izzy lately, and I finally found a chance today.
As you can see, I threw Izzy on the lunge line after tacking up just to make sure everything would be fine. She was quiet and relaxed, so I hopped on. We started out doing walk serpentines and bending. (Aside: I forgot what riding a bendy horse was like!!)
Izzy was quite flexible but pretty much planted behind my leg. I chose the most obvious path of action and asked her to canter off. She took one canter stride, then threw in two big bucks. I shouted, pulled her head around, and stopped her.
And then I thought. I can count on one hand the number of times Izzy has bucked with me, and that includes today. I jumped off, pulled the saddle off, checked her back, and checked the fit. Everything was fine. However, I happened to be there and see the trial ride on Saturday. I know the lady riding her was terrified of her even though she was being super good. If I had to bet, I'd think Izzy was acting up because she thought she could get away with it...
I saddled up, got back on, and put the mare to work. Shoulder in down the short side, leg yield to quarter line, then back to the rail. Down center line, do a figure eight with correct bend. Counter bend. Spiral in. Balance. Spiral out. Halt. Trot. Haunches in. Leg yield. Izzy tried a couple of her more fun evasions--dropping behind my leg and threatening to spin. I growled at her and kicked her forward. 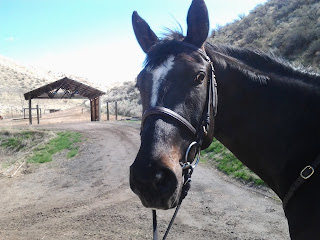 The biggest thing I noticed was that Izzy was -very- inconsistent in the contact, which is weird for her. Instead of getting to prance around like a DQ, which was my plan, I had to sit up and really ride the mare. I had to stay really still over her, keeping a soft but very steady contact and constantly ride her up to it. After an hour (of trotting! oh joy!), I finally felt like she gave to me a little bit--she was willing to trust the contact and released her body a bit. It still wasn't what I had in mind, but that's a lot of trotting for anyone, and I still had chores to do.
When I got off, I told Izzy I never wanted to ride her again. That isn't technically true. I do enjoy the challenge she presents and she does push me as a rider. She and I have this weird connection. Today, I felt not like a rider precariously balanced on top of an unpredictable beast, but like part of her. My shoulders were connected to her mouth, not my hands to the reins. She really wasn't naughty (other than the bucking), but I felt like even if she had been, I would have been fine.
Don't get me wrong--there are absolutely things I love about her. As long as she's with me, I feel caught between two worlds. She's gorgeous and talented and I want to be able to handle her. It's just that we aren't meant to be--as much as I love Izzy and dressage, I want to jump, and not for two seconds do I want to sit on her pointed at a fence.
Posted by SprinklerBandit at 1:51 PM