Someone Pissed Off the Rain Gods 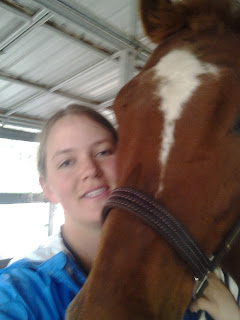 In light of the fact that it was pouring rain like it never does here, I decided today was the day to take some cute close ups of Cuna. At least, as cute as you can get with crappy lighting, the world's cheapest smartphone, and myself involved. Here is our best attempt at a myspace picture. It is not easy with a touchscreen phone, let me tell you. :-p 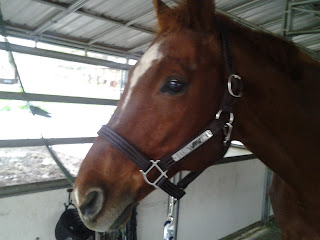 It was raining so hard that even with a completely waterproof coat with a hood, I didn't want to go out in it. Cuna was the perfect hangout buddy. He scavenged for hay in between a thorough grooming and all the picture taking. He made faces at a few of the horses in their stalls, but true to form, didn't do anything naughty. Also, he is the boss of most of them. 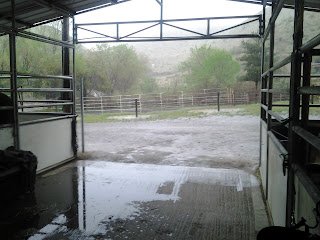 This was our view from the barn aisle. You can't really tell from here, but there was a shallow stream running down the middle of the road. I didn't want to get closer for a better picture because of all the water.

Plus, there was no hay by the door. Cuna was not interested. 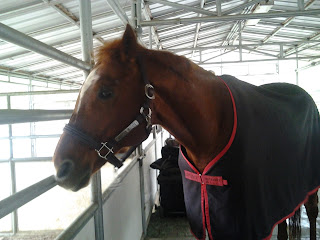 I know he's worn the cooler before, but he got the teeniest bit wet in the aisle, so I put it on him for a few minutes to make sure all was well. As you can tell, he'd pretty well reached the end of his picture tolerance at this point.

The arenas are completely flooded. I was planning on trying another new saddle on him and just walking around to see how it felt, but when it's raining like that, there is no point. Tomorrow, I guess. I think it's supposed to be sunny again.

If not, we're gonna have to go gator hunting. It's like the everglades around here!
Posted by SprinklerBandit at 2:33 PM

Email ThisBlogThis!Share to TwitterShare to FacebookShare to Pinterest
Labels: Cuna, not riding, pictures