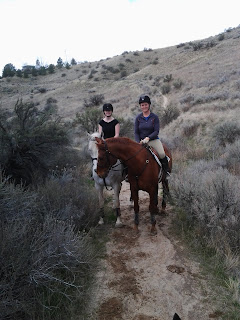 My sister came out to the barn on Sunday. We'll call her B. Here are a few facts about her for those of you not acquainted.
1) She's not at all horsey
2) She hates getting dirty
3) She's always perfectly turned out
4) She's quite athletic
5) She's pretty game

I figured I would let her meet Cuna, throw some tack on him, do a little arena flatwork, and if all went according to plan, let her hop on and take him around at the walk for a few laps. In light of that plan, I had her sign a release form in the tackroom before we went to see Cuna.

Stephanie walked in and asked if my sister was riding. Before I could explain my detailed and easy plan, she suggested that B hop on one of our other old broke horses and ride with me. I thought it over for like two seconds and thought, "With two old, broke horses on a warm, sunny day on a fairly strenuous trail, what could possibly go wrong?"

We grabbed tack for two horses and headed out. I convinced the western trainer to come with us on a horse she was working. 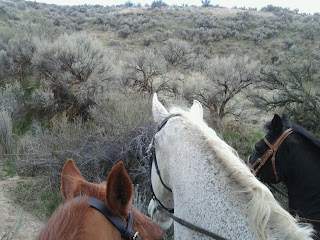 All was going well. The western horse was jigging and pretty up, but since the horses' collective age was like 60, we dubbed it the 'geriatric trail ride' and went with it.

Right after we took this picture, the trail went up. And up. And then up more. I figured the difficulty of it would back off the jigging horse and Cuna and the other oldie would continue chilling.


The western horse did back off, but my sister's mount all of a sudden got an idea. He tried to pass Cuna, who was blazing the trail. One thing: Cuna was a -very- successful racehorse. One of his quirks is that he must ALWAYS lead. ALWAYS. This hadn't been a problem at all until B's horse picked up a quick trot and darted past us at a wide spot in the trail.

All of a sudden, I have two big problems.
1) My non-horsey sister is on an out of control horse.
2) Cuna is losing his mind.

Obviously, galloping up behind B is a terrible idea. Unfortunately, Cuna became completely obsessed with it. I shouted instructions to B as Cuna cantered in place and tossed his head and pogo-ed around the mountainside. She got her horse stopped, and we caught up. I instructer her to put her horse's nose in Cuna's tail. After all, last Sunday we had a 4 year old bouncing off his butt for 90 minutes and he didn't care at all.

Problem: the four year old wasn't blowing like a racehorse and biting him in the butt constantly.

Ok, I think. We just need to blow off a little steam and wear the horses out. Let's just pick up a nice trot and let the horses work against the hill instead of fight with us.

Of course, Cuna thinks the race has begun. B's horse isn't going to take that sitting down. Western pony has no idea what's going on. I manage to keep Cuna contained to a REALLY BOUNCY canter, but realize that blowing off steam for him is going to be more than B can really handle, brave and balanced or not.

We finally (tenuously) crest the big hill, but we're still a mile from home. The terrain has leveled out enough that it doesn't contain B's horse naturally behind Cuna anymore. B's horse takes off trotting. The western trainer and I coach B into circling around. We stop and stand and let them settle. Every time we try to make forward progress, B's horse takes off trotting. She's been game up to this point, but I can see cracks in the veneer--it's starting to get scary for her.

I didn't have a brilliant idea. I didn't even have a good one. All I could think was, "let's get B back to the barn without getting her hurt or more scared. She really didn't sign up for this."

As I'm thinking this, Cuna is prancing in place and tossing his head like a loony. OMG IT'S RACE TIME is all his brain is comprehending. Needless to say, that's not helping B's horse a whole lot.

As if on cue, the western trainer has B ride up next to her. She leans over, takes B's rein, and starts ponying B's horse. Almost instantly, B's horse relaxes. Cuna does not. He alternately prances and jigs, leading the way down the mountain while furiously tossing his head. THE RACE HASN'T HAPPENED YET!!!! In my brief glimpses back, I notice that the western trainer is not only ponying B's horse, she is managing her own mount with on hand, which includes keeping the mare's rear end pointed away from the gelding. Nicely done.

We make it back to the barn on schedule, with everyone still in the saddle. Cuna is completely lathered. The other two horses are fine.

Happy birthday B!
Posted by SprinklerBandit at 10:33 PM