Since it was the six week anniversary of Courage coming off the track, it seemed like a pretty good time to take him to his first show and start building up positive experiences for him. We didn't pre-enter since it's such a crap shoot with babies, but we loaded up and headed over about an hour before we thought our classes would run. Our information was based on a conversation with the organizer the day before.

You can see where this is going.

Pretty much everyone around here who jumps had the exact same thought. We barely squeezed the trailer into the parking area and would not be able to leave until a lot of people ahead of us decided to.

Accordingly, the show ran late. Very late. Instead of tacking up and hopping on ASAP, we now had a very long wait. The good news was, standing around is an AWESOME way to teach greenies that shows are boring and easy.

We spent hours standing around in the holding area and just taking it all in. Horses jumped big jumps, kids trotted by to get to their classes, people came and went, the loud speaker got used.

Courage didn't so much as spook.

I'm pretty sure it was his first time to ever see a pony and we did establish one thing about his personality:

He LOVES ponies. The smaller and cuter the better, but pretty much anything under 14hh looks like a good friend to him.

Given the opportunity, he wanted to trot after them and be their friend. I didn't let him, since I thought giant prancing thoroughbred might scare the small ones.

After many hours of standing around and visiting and meeting his facebook fans, it was finally time to saddle up and go. Bear in mind that we were here for the experience. We signed up for ground poles and the whole point was just to go out in the arena and see what it was like and let him see new stuff in a different situation. I wasn't planning to push him or work on contact or do anything he'd find challenging in a new environment.

We avoided the warmup, because it was chaos, but eventually we had to go stand by it while we were in line for our class. As horses cantered past us and people milled around the in gate, the horses in the pasture next to us took off galloping and bucking.

Courage stood on the buckle on watched it all. What a stud.

Finally, it was off to the show ring!

I let Courage walk around the far side of the arena so he could see the standards and the indoor next to us and the spooky hay barn, then we headed for our course.

Fancy jumps, flowers, leaving his buddy, whatever. He trotted calmly and listened to me. He did decided to actually jump the flowers, but he listened and I stayed with him.

I kept my reins soft and just asked him to follow the pattern. I let him canter after the poles, but brought him back to trot in the corners.

To my complete surprise, he was totally relaxed and easy. He continued working on stretching into the contact of his own volition. Again, he wasn't consistent, but the fact that I could put him in an intentionally spooky environment and have the same work I get at home?

Amazing. I still can't believe it.

We did have one tiny moment just so I'd remember that he is still kinda green. The last two jumps on the course were an outside line. The first pole was decorated with flowers. He'd been very willing to go over them, but very respectful of their space, which I think is perfect.

It was pretty late in the day at this point, and he cleared them with room to spare. It was definitely the biggest jumping effort he's given me yet.

That was a little exciting, so there was a land/scoot/something to follow it up with. I'm interested to see the video, just because it all happened so fast that I was pretty much riding on instinct.

He got a little hoppy/light in front and I corrected immediately.


When I think about it, I would have preferred to respond differently. It didn't feel naughty or wild--more like he just sort of surprised himself. The excess energy isn't bad, but I would have liked to put him to work on a little larger circle. As it was, we demonstrated an excellent rollback for everyone and then carried on.

The focus was on having a positive experience, so I rode to the next obstacle and forced myself to loop the rein and trust him.

Wouldn't you know, he was fine.

I'm sure we entertained the judge and spectators by my constantly praising him for every minor thing (you turned!! you're like baby einstein!!), but I was just blown away by how awesome he was about everything.

Jumps, ponies, warm up, judge's tent, loose horses, whatever. At six weeks off the track, he was perfectly happy to hack around on the buckle and visit with new and old friends. 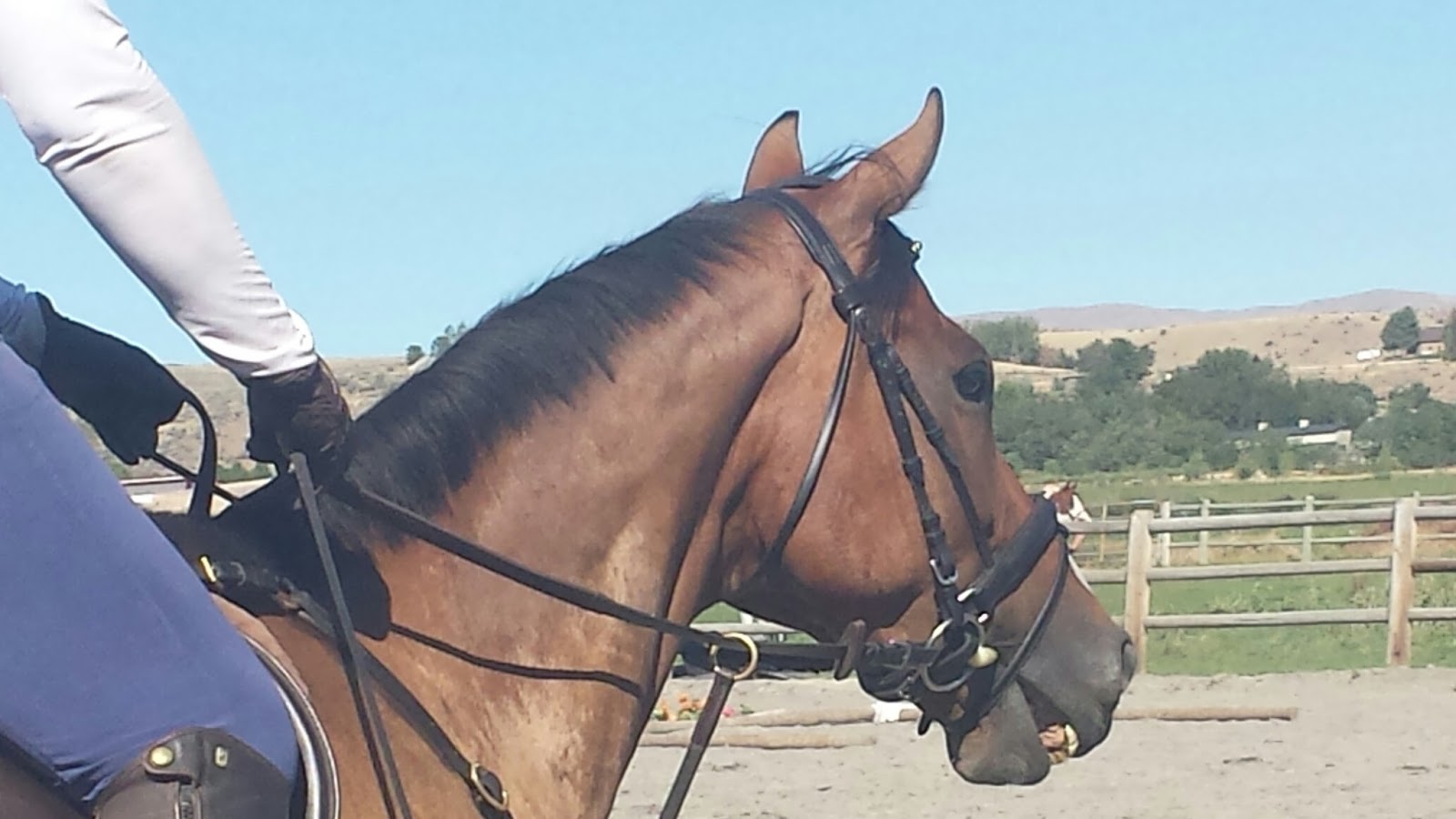 And one last shot I have to share--I am an obsessive groom, but I've been strapped for time lately. I broke down and pulled him mane right before the show.

Now he looks like a proper grownup. Too cute!
Posted by SprinklerBandit at 6:00 AM