We're prepping for the incredibly high stakes "Pony Club Schooling Jumper Show" this weekend. As such, we're firing on all cylinders--Courage scored himself a trainer ride on Saturday. It didn't start out pretty, but he's a smart horse and he quickly figured out how to cooperate. Redheadlins gave us some exercises to work on and some feedback to improve my ride in order to help him out.

Yes folks, we have entered the phase of training where I actually have to work again. Huh. I was liking this "cruise on the buckle and do nothing" phase, but I guess steering and a topline would be nice too.

As per his schedule, he had the following day off. I worked him Monday, but we kept it easy because we had something else to get done first. More on that eventually.


Today I had just enough time to race out and squeeze in a quick "jump school" before heading to work. We started out with flatwork--mostly walking, reminding him to give to the bit and pay attention to my legs. It's a lot harder for me than for him, since I have to remember to keep him thumbs up, give him contact, and be quiet with my legs so that it means something when I do use them.

I felt moderately successful. I need to get my timing better and make my aids clearer, but the two of us are muddling along pretty well. After he gave me some really nice work, we took a break to get pictures of Diva doing some fun stuff. I have to say, I love that I can just drop the reins and wield a camera while my recent OTTB just chills out. It's pretty amazing.

I picked up the reins (sort of) and headed off to have a canter. He gave me his nicest transition to date, plus it was to the right and he got it on the first try. BOOM. No idea where he learned that, but it was lovely. He was relaxed through his neck and we even cantered our first circle that was smaller than the size of the arena.

He was similarly awesome to the left--forward and easy and lovely transition.


Then to the jump school! We had made some strategically placed piles of poles that I aimed for. We haven't readdressed poles or jumping since mid-last-week, so I didn't want to surprise him. He wiggled his way over the first pile in awkward fashion. In fairness, he's probably never seen a pole pile before.

Still. He likes to go over things and he clicked into gear, so I aimed for another pile. I tried to keep him straight to the poles with my leg on and make it clear where I wanted him to go. 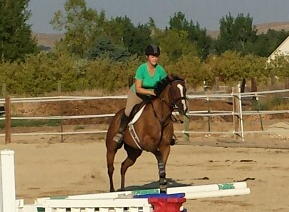 He sort of skidded to a stop, but I was like "No way, no how. Forward over the poles."

And he jumped! His first actual little baby jump! Front end, then back end, and he was every semi-coordinated about it. He cantered off and seemed quite proud of himself as I praised him effusively for being such a genius.

Next we headed for a nice little crossrail. Something had clicked in his brain, so even though we wiggled to the base, he went forward and jumped! And landed in the canter! I was beyond excited. My little dude is figuring it all out.


He was much more forward to his fences (Xs) and seemed quite pleased with himself. He never touched a hoof to a pole, either. We just popped over the crossrail a few times since he was being so good and we're really only doing groundpoles at the show anyways.

We have plenty to work on (jump ahead much?), but I am thrilled with how well he's doing, especially since his training schedule seems to be primarily days off.


Posted by SprinklerBandit at 3:14 PM