Despite the threatening clouds and sometimes pouring rain, Alyssa of Four Mares, No Money came out yesterday to get some shots of our fancy baby thoroughbreds.

We focused on flatwork, and I was really pleased with what Courage gave me. Without further ado...

We saddled up in a hurry to avoid an incoming rain storm, but somehow ended up in the middle of it. Regardless, Courage is flexing his poll and walking forward.

I'm not asking him to be round and come on the bit at this point. I just want him to carry his head like a horse and give to the bit.

He improves in leaps and bounds every ride. 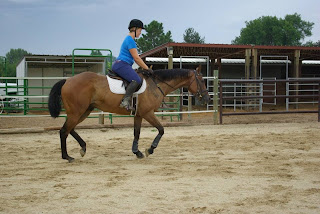 He's trying to figure his new life out, so he does offer some really nice stretches, but they aren't consistent or into the contact yet. It will come with time. I'm just glad he's thinking about it all.

In the canter, I don't worry about contact right now. I just want him going forward in a good balance and carrying himself. I'm starting to add in circles and ring figures to test his balance.


There was an incident with a galloping horse in the pasture that I was worried he'd be distracted by. I thought the best way to keep it from becoming a problem was by redirecting his energy and asking for a downward transition to trot.

Instead, he dropped his croup and gave me the cutest little collected canter through the short side of the arena. I'm still in shock.


Even though we don't work on his frame at the canter at all, our work in the walk and trot is paying off. He's experimenting with carrying his head lower and working through his back.

Again, it's all on a long rein and his frame/contact is inconsistent right now, but I love that he's experimenting to see what I'm looking for.

The more I look at his canter shots, the more I think that I just plain need to spend time in the canter. It allows him to use his body very well. I'm thinking I need to mix it in throughout the whole workout and see how much it helps him. 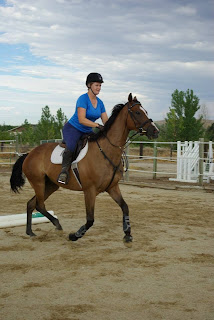 We trotted over our tiny pile of poles again, but the little man has totally got it now. I love that he's landing in the canter (on the correct lead), with one ear on me and one looking where he's headed. What a good boy. 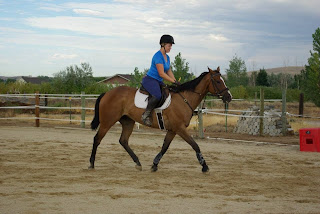 His trot isn't dressage ready and it shouldn't be.

That said, he's taking steps in the right direction and it is so fun to be along for the ride. I can't believe how much he's improved in just the last week. What a star.


Alyssa was one of our partners in crime at the track, so Courage remembers her as the girl that brought him giant buckets of grain (and took home one of his friends).

After our ride was over, he was pretty cute about coming to see her and insisting that she pet him. Even when she tried to walk away, he followed her around the arena. 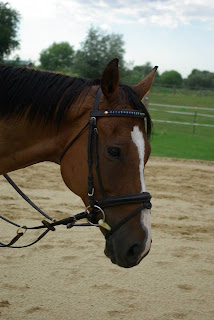 I love his relaxed posture and kind eye in this shot. Plus his face is just so darn cute. 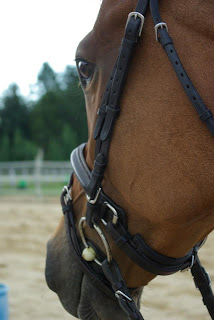 And this one is beautiful. So thoughtful and strong. He looks like a fancy dressage horse. 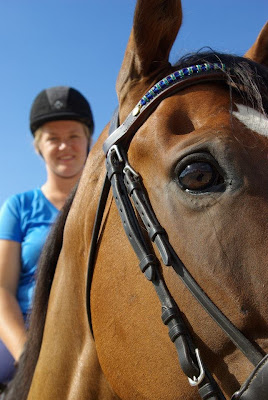 But this one has to be my favorite.
Posted by SprinklerBandit at 6:45 AM