You know that moment when you just want to shout "He gets it!" and you're all warm and fuzzy on the inside? The last time I felt that was when Courage was prepping for his XC clinic and he figured out that he was always supposed to go over the jump in front of him.

And then there was Sunday. We were in the midst of the fun photoshoot for the Dream Horse Studios contest and I pointed Courage at a little crossrail. I felt him slow down and look at it. I was just beginning to wonder if he was going to slam on the brakes when his front end lifted off and we were jumping over the tiny jump.

Actually jumping. Folding his knees and taking off, landing in balance and cantering away.

He jumped four tiny crossrails, each one nicer than the last, before we called it a day.

Monday we tried again, this time over a little course. Courage seemed to know he'd gotten something right. He regressed a little and tried some stuff he hadn't even thought about in a while--wiggling, stopping, and leaping--but it wasn't mean or naughty. He was just re-establishing that he knew what this was all about.

He landed cantering, expressing his enthusiasm. I got him pointed in the right direction. I even got him calmed down to the point that we could trot a crossrail without going airborne on the landing side. 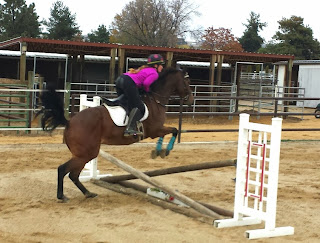 I wanted him to accomplish some specific goals that day, so I put a more experienced hand on the reins and watched my little man canter over his first jump. Jump his first related distance.

He did them with vigor and panache. I felt all warm and glowy as he completed a little course with cantering and a vertical and a line. I don't want to push him, so we let him end with that.

And then we jumped Wednesday. It's like a switch has flipped in his brain--no more awkwardly collapsing over the first jump and then going "O HAI THIS AGAIN."

Instead I pointed him at the first little crossrail and he locked on and went for it. He was jumping, just like the past couple of times. We were forward and confident. I started stringing a mini course together--the second jump in the line, the crossrail on the diagonal, around the corner to the vertical. I stayed light in the saddle with my hands wide. I didn't grab him and I didn't scoot him with my seat.

Courage LAUNCHED over the fence. I came flying out of the saddle and landed in a heap on him. My feet were somehow still in the stirrups on the other side as I just barely got him turned away from another jump he'd decided to do.

We laughed and laughed and told him what a good boy he was while I got myself put back together. Despite my discombobulation, he'd landed in balance and didn't even offer to do anything naughty.

I hopped him over another crossrail to make sure he hadn't scared himself, but he jumped it like an adorable little hunter and cantered away softly. I couldn't wipe the ridiculous grin off my face. Heck, it's still there.

He gets it. He still has plenty to learn (so do I!), but he's taken another big step forward towards being a sport horse. I'm so proud of him.
Posted by SprinklerBandit at 5:00 AM