I want to put these thoughts out there and explain my decision making process. It's really more for myself--I've never fully verbalized what Cuna and I went through. I'm not trying to prove anything to anyone and since I'm a grown up and a horse owner, I can do whatever I damn well please anyways. 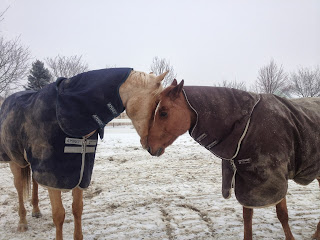 We had an exceptionally hard (for us) winter last year. Layers of snow and ice restricted all movement and limited turnout. Cuna hates cold weather, and his general demeanor was cranky. We pulled his shoes towards the end of the winter because we weren't able to work and his farrier was very concerned by his feet, but their quality and lack of heels.

Two weeks after the shoes came off, the weather finally changed. We worked back to up to normal training. We started out tip toeing around in the arena and worked up to trotting and cantering and hacking out. Cuna needed his shoes back on to prevent further deterioration of his feet.

In February (Valentine's Day), we started back riding in the hills. Cuna and I would trailer out once a week with a friend. She was conditioning to run some cool eventing tracks, but we started out walking. Cuna is a pretty fit horse to begin with, and getting more fit has never been an issue for him. We matched the younger horse stride for stride, in the arena and in the hills.


All seemed well. He was a little stiff, but since having his hocks done is a significant investment, I was holding off a bit and compensating by not asking him to do any hardcore dressage and really use his hocks. 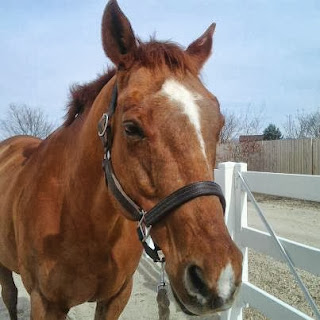 And then in March we went out in the hills and he tied up. I've read through the literature, talked to people who had horses tie up, and gone over everything about Cuna's care. He had none of the risk factors and was on a great diet.

Several people have suggested that he simply wasn't fit enough to do the job. To that I say these things:

1) He was fully as fit as his friend, who had no problems whatsoever.

2) The tying up episode started almost as soon as we picked up the trot. I didn't know what it was at the time, or I would have pulled up immediately. He kept going forward through the whole thing, but he was nearly crippled at the end. His heart was in it, his body couldn't take it.

It's also been suggested that the "spring weather" contributed. To that theory I say:

1) Bullshit. If 50f is the magic temperature at which horses tie up, we would see a lot more problems.

2) I have ridden this horse in all terrain and all temperatures from 15f to 105f and he'd never presented any sort of problem before. I have talked to everyone who's owned him post-track, and it had never happened before.

So. There's that. Yeah, maybe a one-off situation, definitely weird, no definable cause. I didn't run blood because I was abysmally broke at the time and he recovered ok, albeit slowly. 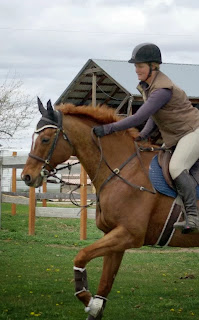 In April, we moved forward again. We started slowly back into work. I wasn't able to take him in to the hills very much--obviously, I didn't want to throw him back in with the younger, faster horse who hadn't tied up and no one else was regular enough to make a huge fitness difference. We did lots of long slow hacks on the shoulders of the roads around the barn. After I got his hocks done, we stepped up our dressage. We weren't jumping a ton because our instructor was busy with other projects.

Cuna persisted in being a little on/off lame. It was slight and usually went away with a little rest. He was lame before our jumping clinic, but some bodywork helped.

He was lame before our dressage show, but again, it was subtle and a few days off made all the difference.


Enter May. I gave him two days off after the dressage show, and then he was unsound. The farrier came out for a pre-scheduled appointment at which Cuna presented as sound. We made a slight shoeing change that we had discussed before.

Cuna felt better for a day, then worse. His only work had been a 20 minute walking hack on flat ground.

I had him checked over by another farrier, who called him unsound in both front feet.

And it spiraled down from there.

By the time we went to the vet, Cuna wouldn't leave his stall to drink or eat his grain. He was in agony, constantly. It can be argued that it came on quickly, but he'd been on and off for over a month at this point. His diet hadn't changed. He wasn't on grass. His legs were cold and tight.


The vet diagnosed him with "lots of soft tissue inflammation in his feet" and later referred to it as a "laminitic episode". We x-rayed and put him in $$$ shoes, but there wasn't much point in doing more. The xrays showed no rotation, but Cuna couldn't walk. Cuna left the vet slightly less miserable than he arrived.

He came back, even more slowly this time. We had to give him IV bute because he was too miserable to eat his grain. At the end of three weeks, he was still off. At 8 weeks post vet, he looked sound at the walk and trot.

My show friends were asking when we'd be back in the ring. My instructor proposed tentative plans to bring him back into work gradually.

And I made the call.

Cuna moved to his field to take the rest of the summer off. And now the rest of the year off. Probably more--my farrier says it will be at least a year for his feet to recover.

Once I turned Cuna out, his demeanor changed. He's less grumpy and more interested in life. His soundness hasn't changed--he was on/off all summer in various degrees. I am in consultation with a vet and we will explore options for him at an appropriate time.

That's the timeline. That's the information I have.

I know it's not the decision that everyone would have made in my situation. I don't know that it was the best possible decision. What I do know is that something wasn't working for Cuna. Mysterious and odd things happen to horses all the time, but when those incidents are getting more severe and closer together, I know I have to question what I'm asking them to do.

At this point, I don't believe that Cuna will come back to work in a substantive way. He'll be 19 in January. He isn't an ideally conformed horse, and dressage does not come naturally to him. I don't think it's right to just keep pounding his feet and body into the ground when he's in this shape.

He is still my favorite horse. I can't explain my connection to him. I would be over the moon if he came back to be sound enough to trail ride again, but at this point, I'm not pushing him. Courage came into my life for a reason. I think that reason is to let Cuna have the well deserved rest that his body craves.

It's heart-breaking. If I think about it for too long, I cry. It isn't what I wanted, isn't what he wanted, but it is the reality that we both have to live with. Yes, older horses than Cuna go out and compete and do just fine. I think that's great. I wish he was one of those horses, but everything I see is telling me that he isn't. His body can't take it, even though his heart is in it.

So there you go. That's my understanding of the situation and the rationale behind the decisions I made.
Posted by SprinklerBandit at 11:31 AM