After two whole months of being off the track, I finally got a group set up to take Courage out into the hills for the first time. I've been really picky about it, because I want his first few excursions to be very positive. Someday, I want him to be a bomb-diggity trail master like Cuna.

We pulled into the trail head and unloaded.Courage did his go-to naughty evasion in new places.

He put his head straight up in the air.

There were a bunch of other people around, and they all admired him and gave him cookies.

He wasn't sure what he was here to be the best at, but he was going to figure it out.

We headed through the gate to keep the seasonal grazing herds in and then I climbed on at a cinderblock. I was glad we discussed standing to be mounted earlier in the week--he stood like a statue and just had a look around.

Our group of four naturally divided into two groups--we had the endurance arabs in one group and Courage and his new girlfriend in the other.

Redheadlins rode one of the Arabs and took some pictures for us. That's Courage and Aspen way out in front.

He felt amazing, still developing post-body work. I was completely in awe as he dropped his head and moved through his whole body.


I wasn't sure what to expect on his first time out. I don't think it's fair to expect him to be perfect for everything all the time. That said, within about 5 minutes of starting the ride, I pulled out my phone and nabbed an ears shot.

He was fascinated by the world around him. This is a landscape he's never been in before. Given his problems with terrain in the past, I was expecting him to be at least a little silly about the hills, the varied footing, and the strange creatures.


He wasn't. He led the way and powered up the first big hill. The riders behind us were impressed by how well he used himself and his steady, ground-covering stride. I was loving every minute balanced over him.

I think it's so important to make the first ides be slow, easy, and non-exciting but OMG HE'S GOING TO BE FUN TO GALLOP. 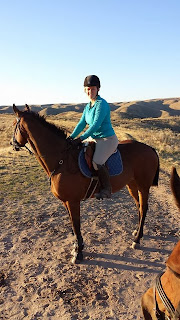 We posed for pictures at the top of the ridge. It was the only minor snafu of the ride--Couage was enjoying himself so much that he didn't really want to stand still. He did, but if you're a horse that loves to look around, having the whole world at your feet is a pretty amazing experience.

I was pretty much just grinning like an idiot and pestering my fellow riders about how amazing he was being. I couldn't even believe it.

Of course, the big test was coming up. 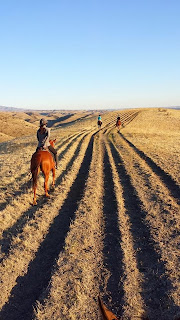 This is what he's had problems with before. At our cross country clinic, it took a good five minutes to figure out how to walk through a dip, after the experienced horses demonstrated how to do it. We don't have good hills to practice on at home, so he hasn't really seen anything like it.

So he marched off.

I had to laugh as I felt him survey the challenge, then shift his weight back and power down the hill without so much as a trip. It was like he'd been doing it his whole life.

We waited for the arabs to catch up, then went down an even steeper portion.

Courage led. Courage followed. Courage walked beside his friend. He let the horses behind catch up. He walked at the back. He went happily wherever I put him without throwing a fuss. Towards the end of the ride, we had to cross through a wash that was basically the grandaddy version of the dip that befuddled him on cross country.

I let his trail buddy go through first, then had him follow her. He walked politely down in, then powered out the other side in perfect balance without even a hint of a hesitation.

We met a man with a large loose dog, and Courage didn't even flick an ear. When I hopped off at the trailhead, I had this ridiculous perma-grin slapped on my face.

I know he's been awesome about everything, but I can't even believe how good he was. He took to it like he'd done it all his life. I was expecting him to at least fuss about some things, but he took every challenge in stride and was looking for more when we got back.

He loved every minute as much as I did.


The sun was quickly dropping below the horizon, so I pulled out a fleece cooler and threw it on him. As we picked up our stuff and loaded the horses, I was just blown away.

I told redheadlins to find me baby Cuna.

I hadn't actually expected her to do it. 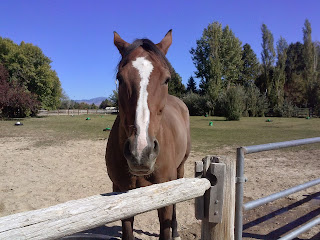 Even on Saturday, when Courage took a well-deserved day off, he came up and visited with me while I scrubbed out water tanks. He was filthy and happy and wanted some scratches. 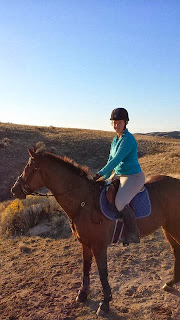 Courage and I are still a new partnership. I know better than to impose a preset idea of what I want him to be on top of who he already is, but the truth is that the more I get to know this little horse, the more I realize I'm lucky to have him in my life. He is so kind and enthusiastic about about life. He loves his new life and he is fun to be around.

He is the perfect horse to carry on the legacy that Cuna started in my life.


Posted by SprinklerBandit at 6:10 AM