It was bound to happen sometime.

I made it to the barn in the late afternoon. It was perfect fall weather--sunny and warm with a cool breeze blowing and gorgeous colors just starting to appear.

Courage met me at the gate of his field and dozed off in the cross ties. All was well until I put him out on the line for his once-weekly lunge. He walked and trotted, but when I asked him to canter, he had a mini explosion. Hm.

Not a huge deal--cantering on the line is still new for him and I'm not crazy about lunging. I take him back to basics that he's comfortable with--walk/halt/walk/trot stuff and he moves well enough. It's the same in the opposite direction. He isn't taking pressure well, even when he's the one applying the pressure.

Still. He looks happy enough, so I put the line away and hop on. After some initial silliness, he stands to be mounted. Then he's leaning through both shoulders and tuning me out and not moving off my leg and giraffing around looking at things that never usually bother him.

Well, that's enough of that. It's time to step it up. I start by insisting that he goes straight. I keep that contact, regardless of whether he giraffes or roots. I push him forward, and wouldn't you know, he gives me some of the nicest work I've ever gotten. We do walk/trot transitions on serpentines and I insist that he hold his line without falling in. He's still a little looky/spooky.

I want to just call it a day in the arena, but I refuse to create that same fear I had with Izzy. I will not let myself be confined by the imaginary safety of arena walls when I'm on a perfectly nice horse.

So I open the gate from his back and ride to the field. The water tank is tipped over. He takes a step back.

No. Not on my watch. Izzy did that and I hated it every time.

I kick him forward. He can stop and have a look, but there is no backwards movement allowed. After a few seconds, I ride him past the offending tank and he keeps it together.

We're just walking a lap around the field. The wind is whipping through the trees on the far edge of the field now, but he's never been a spooky one. I'm caught completely off guard as he leaps forward. I catch him with my hands, but then he pogos straight upward. Shit! I hear my instructor in the back of my head, "Give him a place to go. Kick him forward. Give him something to do."

Forward march! Trot on. He's behind my leg, but it's the thought that counts... Shit! We pogo again. This time he's light in the front end. High on the list of things I hate. "KICK HIM FORWARD," shouts my remembered instructor.

He tries to leap again, but I'm ready this time. "You can do all those things you just did in the arena out here," I inform Courage. "Ain't nobody got time for this." I push him forward, hold the contact, and insist that he go absolutely straight. I don't take behind my leg for an answer and I insist on quality transitions.

And wouldn't you know, he responded. When he relaxed, I walked him back into the arena and let him stand while I patted them. Then I thought "I don't want this to be his safe place." 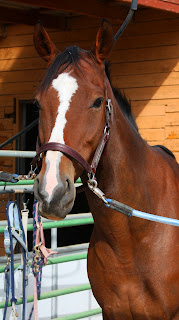 So I rode him back into the field. We stood in the scary place on a loose rein and I patted his neck, then slid off his side.

As we walked back to the barn, side by side, the BO says, "You did get off intentionally, didn't you?"

It was still a perfect fall day. Courage was testing his boundaries with me, and it went well. He learned about me, I learned about him, and everybody came away with a positive experience.
Posted by SprinklerBandit at 7:21 AM