As most of you probably noticed, I'm a total tack whore who loves trying new things. I have a wide variety of boots to suit my very different and very picky horses.

I was thrilled when Lauren, the super-nice owner of Dream Horse Studios, reached out to me to see if Courage and I would be interested in doing a review of her Carnivale open front boots. They're standard jump boots with a twist--lovely blue patent leather with a soft black calfskin lining and stud closures on black elastic.

I tried not to squeal when the box showed up at my house and promptly set up an epic photo shoot to test the boots out. They were neatly wrapped up and smelled amazing right out of the box. I did everything but put them on and prance around the house.

The white stitching is tight and even. The calfskin lining is soft and smooth--no funny edges or uneven patches touching my horse. There are easy to clean--just a simple wipe down. The stud closure looked sturdy enough to handle the demands of every day riding.

Stud closures aren't the most flexible option--there are 2-3 options for how tight to make them. That said, the Equifit T-boots utilize the studs and are massively popular. I've neer had stud closures before, I wanted to know how they would work for a variety of horses with different legs.

We were working with a full set of horse sized boots--open fronts and hinds.

First they went on Ms. Vegas, the completely adorable and awesome paint mare owned by Alyssa at Four Mares, No Money. Vegas is super competitive in the local open shows and has won some serious swag.

She is definitely a candidate for the cob sized boots. The front boots went on her just fine, but her 15.1 self was just too petite for the full size hind boots. That said, she was demonstrating some of her english pleasure/pattern moves and did a couple of jumps in the boots. They didn't move at all and she was perfectly happy.

Next up with the supermodel--all 17 leggy hands of her.

Diva is all legs and built lean, but she has lots of bone. Both front and back boots fit her comfortably. The boots seem to be cut just right--they weren't too tall for Vegas, but they were still perfectly respectable on Diva.

It did take me a couple of tries to get them on right. For reference, the top strap on the front boots goes straight across. The bottom two straps cross. It's perfectly intuitive and fairly obvious when you look at the construction, but somehow I kept messing it up. 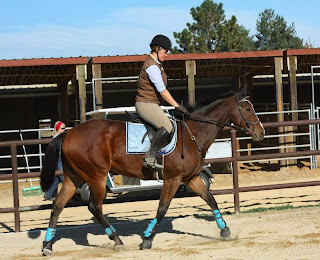 Might as well put three rides on the boots for their first day. I put the full set on Courage. He has had mental issues with back boots in the past, but he seemed ok with these.

We had an excellent ride, walk/trot/canter and a few jumps. Courage wasn't bothered by the boots at all and when I got off, they hadn't moved around or caused him any problems.

Plus, they looked totally cute.


At $90 for a full set, they are an excellent value. Even a set of cheap synthetic boots will run you close to that, so I say you might as well have some fun and order a cool color in patent leather. Blue isn't the only available color--there is quite a range available on the website.

Remember how I said Lauren is super nice? Not only did she send me a set of boots to review, but she's also giving another set away to a lucky reader!! Here's the deal: go to the Dream Horse Studios website and look around. Come back and comment on this post with your favorite product. Your comment enters you in the random drawing for a winner. For an additional entry, share the contest on your facebook or blog and let me know you did it.

Entries close on Monday, November 4th (2013) at midnight, so you have a full seven days to enter and spread the word!
Posted by SprinklerBandit at 5:30 AM