As per the usual, nothing is going as planned. 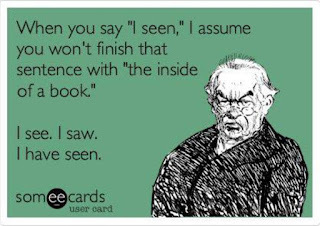 When we left off, I'd just had C seen by his magical body work lady and figured out all our problems and I was SUPER excited. Bodywork was at like 3pm on Friday, body work lady always recommends 24 hours off, but she also said with something that messed up, it may take a second session to get him really sorted out.

Plus, since I think it was a shoe problem, I don't know if he's going to immediately re-compensate for the missing hind shoes and re-pinch the nerve or if his feet are sufficiently tough now and he's ok.

So the plan was to hop on Saturday after 3pm or Sunday and just see what I had. If C wasn't ready to go back to work, he'd get two weeks off and I'd take two lessons a week on other horses in lieu of his normal training rides.

That was my plan at like 5.44pm on Friday night.

And then this happened at 5.45.
I'm the tiny car in the front. As Emma said "world's worst conga line".

I've never been violently rear-ended by a giant truck who thinks driving is a brakes-optional activity before (srsly guys he hit the Yukon so hard it smashed into me and OMG I LOVE YOU YUKON because otherwise.... dayum).

So the whole point of this non-horse related whine is that 1) you should seriously consider not getting hit by trucks and 2) my role as human crash dummy to see if Courage feels good enough to go back to work has been temporarily suspended. I say a week. Doctor says three weeks at minimum.

Given that I get pretty intense pain if I'm even slightly off on my pain med schedule, doctor may have a point, but we're not admitting that to her. TAKE THAT DOCTOR. She wants precious for herself, doesn't she.

I talked trainer into riding if C was perfect on the lunge line, but then the temps dropped into "freaking obscene omg i refuse" levels. Oh and a winter storm is blowing in today.

So what we have now is Schrodinger's horse. He may or may not be rideable, but I can't get to the box to find out.
Posted by SprinklerBandit at 10:09 AM