I dunno how many of you follow I is Roxie, but you should. I've known Roxie's mom for a couple years now. A couple weeks ago, I was texting her about Courage's ongoing situation (let's... not talk about that today) and was like WAH EVERYTHING SUCKS AND IM DYING and she's like "come ride my Roxiecorn".

And as Karen knows, you really shouldn't invite me to your house and offer to share your horse unless you really, actually, for real mean it.

Because I show up.
I really don't think photos can quite capture all of Roxie's glorious bigness. Also she is basically perfect.

Roxie's mom rode Potato and I swung up on Roxie. 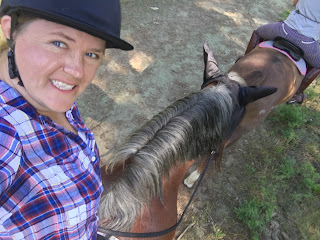 the pony giggles are real.

I'm a tall human-sized-human but Roxie makes me feel like a tiny child. And also she is perfect at trails. We followed. We lead. We walked, trotted, and cantered.

And the whole time I had my hands in the mane, reins on the buckle, and giggled like an idiot because Roxie is SO MUCH FUN. 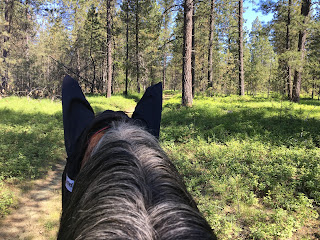 At one point I was even like OMG ROXIE'S MOM TAKE A PICTURE OF US.
And that was just day one! When we were plotting day two, Roxie's mom mentioned that she had a unicorn horn for Roxie that she'd never used.

Which like.
Obviously. If I'd known in advance, I so would have dragged a princess dress along and made everyone play dress up, haha. 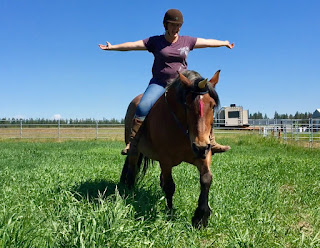 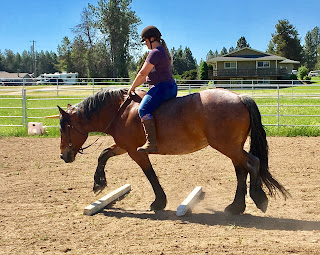 And then many cookies were fed to the glorious Roxiecorn.
All in all, it was a super fantastic weekend and I will definitely be back to harass Roxie and her mom again.
Posted by SprinklerBandit at 7:48 AM