When I conncocted this crazy idea of trekking across the country to go to the biggest equestrian event in this hemisphere, my first thought was to reach out to Karen.


I have been internet friends with Karen since the Hellmare days. I mean, I’m always a bit honored when people tell me that my posts about selling her inspired them to move on from a bad equine relationship themselves, but back when I was in their position, Karen was someone who helped talk me through the process.


Other people might be taken aback when someone they’ve never met is like “hey can i crash at your place with some friends you don’t know”, but not Karen. She’s awesome. She not only said we could come, she also promised me a ride on the fabulous and famous Hampton! (More on him later. Swoon.)


And then when things started falling in to place, I peer-pressured Leah into coming with, replete with inviting her to Karen’s house even though neither of us had ever met Karen. I online-met Leath though a shared love of tack and shopping, so it was only fitting that our real-life meet up occur at a giant public tackrection. 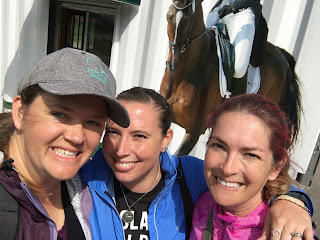 It was definitely a friends-at-first-meet situation, with a shared love of ponies, tack, dive bars, and laughter. We hauled our happy asses to the Horse Park first (well, second… wait third) thing Thursday morning. (One of us can't leave the house without coffee. The other two are Karen and Leah.)


As one of us (me? Leah? I don’t even know) was posting our most excellent dorky tourist picture on facebook, we spied THE EXACT SAME PHOTO only this time featuring Renate and her excellent Canadian friends. We promptly ran into them at Bit of Britain (thus beginning the American Hick Weirdo Nightmare for Renate’s long-suffering friends) and they sent us out shopping with promises of big discounts in another shop. (Shopping recap later I promise).


We booked it across the oudoor shopping, ran into Amy (who is awesome and has the coolest kids/corgi but is sadly too busy to hang out with us much on account of how she was making tacos and riding herd on aformentioned crew).


Also apparently Karen knows everyone in the state of Kentucky. Just thought I’d throw that out there.


Thursday night meant Taco Party at Amy’s campsite, which delivered as promised. We got better acquainted with Renate, met Hillary, Amanda, Lisa… um… oh yes Austen and Liz were there, but we’d actually met them shopping earlier in the day (and wait for the tack wrap up to see how I scored 15 tack ho points for actually getting Austen to buy something). I’m trying to think if I’m missing anyone. Shout out in the comments if I did and I’ll tag you here. Sorry--writing this on a delayed flight home while coming down with a head cold so you kind of get what you paid for today. 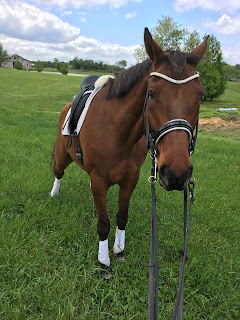 Friday brought more shopping (we uh… shopped a lot) and actual watching of said equestrian event. We met a fun group of people who are definitely not in our income bracket and I ended up sharing a headset with one of our new friends, which naturally led to an afternoon of laughs and tipsy Sally O’Connor impressions. By which I do not mean Sally was tipsy. Just that her understated elegance lends itself to impressions by tipsy spectators.


We then proceeded to pick our coursewalk based on what Renate’s group was doing but she had to run back to the car, thus stranding her friends with us (remember, American Hick Weirdo Nightmare) and possibly there was a misunderstanding by one of said Americans about the contents of a package in a gift bag and someone huffed electrolyte powder.


We won’t say who that someone was but her initials are SB and she very much regretted that choice immediately after making it. If you were wondering. Also read packages before you just assume they contain gels. JUST SAYING.


Saturday was all its cracked up to be. And more. The estimable Jen drove two hours to the Horse Park to meet us, despite being sleep-deprived and horrifically busy. She also brought Bitsy, who is the most popular dog I’ve ever met. I’ve been blogger friends with Jen since like the beginning of time and she is one of those incredibly authentic people who writes the way she is and so meeting her was less like meeting her and more the “oh hey” that you’d say to old friends. (I also demand tack ho points for getting another notorious blogger spendthrift to cave and buy shit at the trade fair.)


We had an excellent dinner with Renate and friends (who still found us kind of horrifying but consented to a group dessert photo) and then it was on to Sunday!


Leah had to leave us and go back to this “reality” thing, but Karen and I had covered seats for stadium. Oh and we shopped more. Once we got situated, Alanna came and found us. I’m still giggling that Alanna is one of the closest bloggers to me geographically, but we had to travel like 1500 miles across the country to actually meet up. But hey! Glad we did and hopefully in the near-ish future, I’ll actually make it to her neck of the woods.


After stadium (ERMEGERD what a match!), we were finally able to catch up with the whirlwind that is Stephanie. So glad we did! We even coerced Renate and her friends into joinging us for one last hilarious and amazing dinner at a restaurant that was ALL KENTUCKY. But um. They had unlimited chocolate pudding at the salad bar? So that’s something. (Shout out to our server Mitch for really bringing the southern charm. I think that’s what they call it.) We had an absolute cross-cultural blast with the whole crew.


I’d say we said our good byes, but the fantastic thing with internet friends is that you aren’t really separated when you leave, so shout out to all the awesome ladies who made this past weekend absolutely unforgettable. Can’t wait to see you again. (I’m thinking Rebecca and Dressage at Devon. Already have places to stay!)
Posted by SprinklerBandit at 8:01 AM