One of the things Karen mentioned when she said I could come stay with her is that I could ride the estimable Hampton. 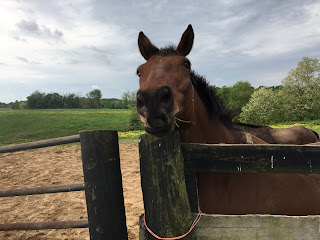 I post videos of me riding fairly regularly, so y'all know I am not a super amazing rider.

I have BEEN THERE when you're watching someone royally f**k up your horse and just standing there counting how many weeks it's going to take you to put them back together once they get off.

So no way in hell I'd hold someone to an offer like that. We put way too much into the giant, fragile beasts of ours to just let every internet weirdo who shows up at our house get on them.
I would also like to not that I probably win the award for world's most oblivious blogger because apparently everyone BUT ME knew that Hampers was "Hugenourmous" (per Andrea) and I just thought he was normal size until I stood next to him like DAMN SON. DAMN. Because he is a big, big horse.

I figured I could at least take some cute iphone pictures for Karen. 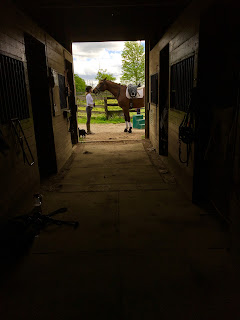 But with all the cookie-stuffing, ear-forward-getting, and outfit-changing, the one thing that really shone through was Hampton's hilarious and amazing personality. I'm really, really picky about horses--I don't like rude, pushy, mean, or needy. 97% of horses I interact with are a total "meh pass" for me (and the other 3% are usually indicative of my deeper personal issues, but who's counting?!).


I'm trying to write this without sounding like the world's worst tinder first date, but Hampton just has this goofy personality and larger-than-life persona. He's hard to photograph because he just wants to be with you the whole time. And not in the needy-pushy-whos-the-alpha-mare sort of way that makes me INSANE but like in a friendly, perfectly adorable way. 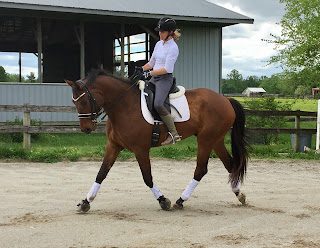 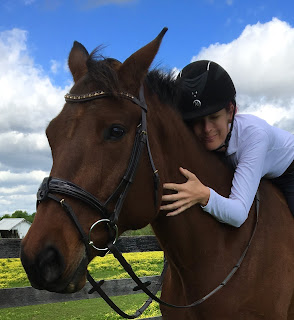 ...I will try to keep this going so Karen doesn't flip out and think I'm taking the Kia to Kentucky and stuffing Hampersand in the back seat. BECAUSE I MIGHT.

Haha. You didn't see that here. 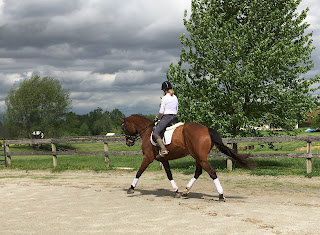 Regardless, Karen popped on Hamps and did all the cool dressaging. She's all "oh I'm not a very good rider" and I'm like "yeah you super suck, other than like your perfect hands and legs that never move and excellent posture and your excellent seat and perfect outfit BUT OTHER THAN THAT..." so anyways don't believe Karen when she says those things because believe me I wish I rode like her. 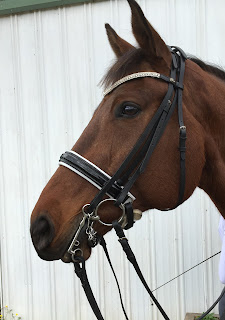 And then she's like "want a turn?" and I'm like "GROND WANT RIDE PONEE YAS" because I am basically like a caveman next to all that elegance.

We shortened the stirrups and I crawled onto the giant Hampton and giggled like a pony rider. HES SO BIG.

I thought I was a Hampton fan before I got on. After riding him? DAMN SON. DAMN. Legit one of the coolest horses I have ever sat on. Scratch that. The coolest. Because like I have sat on some $$$$$$ horses and not one of them was I like "LOOK A BEAR" to distract their owner and then galloped off into the sunset on. (Not that I did this either--Karen is pretty smart about where bears are and also a hella faster runner than me.)

Cough. Let me try to use words and facts here. I don't know enough to ask Hampton to do cool dressage shit like Karen does, but I can toodle around like a first-ish level dressage rider. Hampton did EXACTLY what I asked of him. He wasn't running off with me and I wasn't pony kicking him to go. He put in the effort I asked for. If I asked for a downward transition and totally dropped him and took my leg off, well...
But if I sat up and rode and put my leg on and looked where I was going?
I'm pretty cautious on new horses, especially with my fresh-out-of-rehab status and total lack of fitness right now, but Hampton put me at ease and was a total blast to ride. Karen even assisted from the ground and I did my first ever piaffe!
I don't really know how to wrap this up. I love Hampton. He is the shit. THANK YOU KAREN for putting up with my weird caveman self and letting me play with your awesome pony. 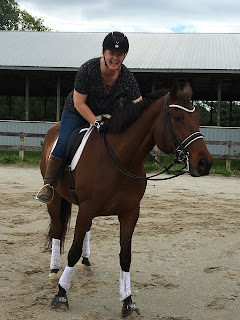 And if he disappears from your pasture, definitely don't look in my back yard.
Posted by SprinklerBandit at 8:08 AM