Courage wraps up his post-injection stall rest this evening when I'm cleared to pull him out and lunge him. I've been hand grazing him every day and he's been a champion patient. 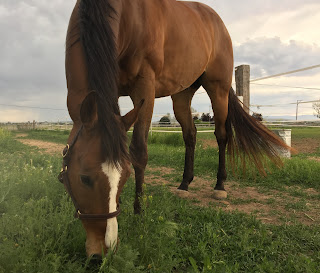 Will he be ok? What is ok going to look like for us? Should I stress buy a brown dressage saddle?

Obviously, the #1 thing I'm concerned about is Courage's comfort level. Objectively, I know that we have just taken the first steps in terms of management. I know there are a ton of options left on the table. I know I have a fabulous team in our corner. I know that we weren't planning on showing this year anyways. I know that I'll make responsible choices for Courage. 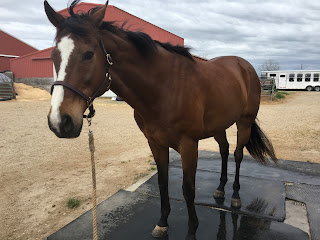 But I wouldn't be an ammy owner if I didn't have a few he's-crippled-for-life-omg-im-the-worst-owner-ever meltdowns a day, you know?

So those have happened.

I also keep thinking about jumping. Which. Obviously. He will never do again. Part of me knows that we took jumping off the table a long time ago and bitching about that now is just weird. And part of me is glad to finally know why the horse always hated grids (pound those ankles, baby) and jumps (landing sucks) and why I could never get him to use his body correctly (hard pass. don't blame him).

But part of me is profoundly sad that it's gone. Because that is something I miss. 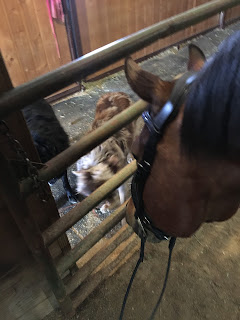 There's also the questions--when I tell people what happened, the first thing they say is almost always "so what will you do if you can never ride him again?"

Which is clearly melodramatic, because I rode him before and I'll ride him again and it's not the end of the world, though it definitely might modify our goals somewhat.

But you know. Just hit that nerve with a hammer, why don't you.

Though perhaps equally bad is the "well many horses with much uglier legs do much harder things", which again, is true.

If Courage was one of those horses, we wouldn't be standing here right now. WHERE WE ARE CLEARLY STANDING.

So it's a problem.

And we're dealing with it.

And bay horses look kind of washed out in brown tack.

But if the right brown dressage saddle came along, it would look fabulous with my new bridle. 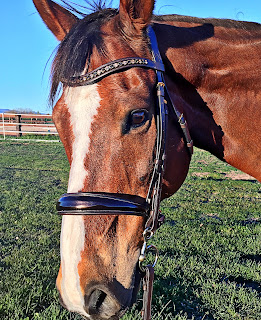 I mean. It's not like I need a jump saddle any more.
Posted by SprinklerBandit at 7:55 AM