Because I am an eminently rational and emotionally stable person, I possibly had a full-on "omg my horse is permanently broken and will never horse again might as well give up now and just do trails" meltdown.

You can probably see where this is going.

I made a lowball offer on a western saddle that I thought was pretty. I did have a couple western friends including Alyssa) sort of eyeball it and say it might not be utter shit. Because like. I know NOTHING about western stuff. Nada.

I thought the seller would sit on it for a day and then turn me down.

But instead I had a totally reasonable counter offer within about ten minutes.

Did not see that coming.

Fortuitously, a good friend and sometime western rider was coming in to town this past weekend.

Which is good. Because you don't just slap a western saddle on a horse. You need all kinds of western shit like a latigo and an off billet and a sweet ass felt pad. Oh and it's mega hard to tack up without a cinch. WHAT SIZE OF CINCH. How would I know.

I dragged said friend to the western-y store and probably killed a lot of her brain cells figuring out what I actually needed (actual quote "so you put the penis thing in the hole? HOW DO SLOBBER STRAPS GO ON")

That got expensive quickly.

And um. Possibly we were feeling up much fancier western saddles and now I'm like "don't want cheapie want real thing", but that's another problem for another eBay meltdown.

Anyways I dragged friend and all the newly acquired shit out to the barn and took waaaaay too long trying to figure out how to put it all on. I mean. I have put a western saddle on before, but let's be real, it's been a while.

I did a quick lunge for Courage just in case he thought the saddle would eat him or something, but homeboy was fine.

And then I gracelessly flopped into the saddle, realized my stirrups were way too long, almost fell off the side trying to fix them, and finally got them to a different length that is hopefully closer to right.

My horrible hunter perch is bad in a dressage saddle and worse in my western saddle, but Courage was fantastic and western friend yelled at me enough times that hopefully when I get pictures back, not all of them are terrible? 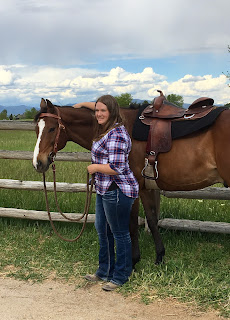 Don't hold your breath.
Posted by SprinklerBandit at 7:44 AM