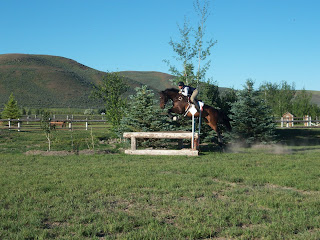 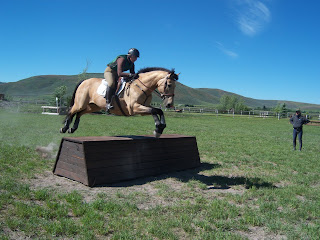 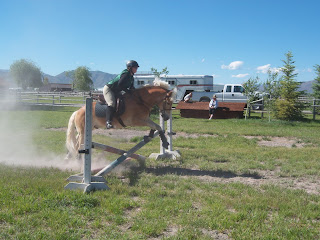 None of the people in those pictures are me. Just so we're clear. I spent the weekend at an event derby in Bellvue Idaho, which was so very fun. I was the groom for the halfie pictured and let me just say, he is one fun little horse. (If you want to see more, check out my facebook album here.)

It was a fabulous way to spend the fourth of July, especially since it lacked the sappy horribleness of most celebrations and there were no fireworks.

TODAY is what I want to talk about. I didn't get to have a lesson because my now-medicated pony is lame in both front feet. It's actually good news, because I was thinking coffin bone fracture when I thought she was just lame in one. Don't ask why I immediately jump to a worst case scenario. I have no idea. I also have no idea why I can assume a run-of-the-mill lameness is a fracture, but I am incapable of believing that there are two fractures. ;-)

Since I didn't get to ride today, I went to the tack store for several very specific items: vet wrap, a helmet, bell boots. I even knew brands and sizes (tipperary large, black vetwrap, XL pro choice no turns). Guess what I came home with? Yeah, none of those items.

Instead, I meandered back to the consignment department and found a water proof saddle cover for $15. I knew they cost about $30 in the dover catalog, which I read religiously, so I snatched it up. I'm planning on banging Izzy's tail and putting it up, so I grabbed some Eqyss detangler to do the job. I've used it before and loved it. Then I found myself in the helmet department. I tried on the Tipperary that I thought I Wanted and HATED how it fit. Weird. I've had a Tipperary for a really long time (like way longer than sane people keep helmets) and I love it.

I went and found a sales person who helped me fit helmets. She commented that the Tipperaries don't fit her head at all, especially the newer models and recommended an Ovation helmet, which I had passed on mentally because I just assumed they were the cheapie crap Dover brand. Wow. I tried it on and it fit like the Tipperary I already have. Score!! It also has an adjustable dial at the back which is unobtrusive but excellent for if my head swells when Izzy wins a class or (more likely) someone wants to come ride with me.

Also in the consignment section, I found a tempting pair of Veredus Event-tec front boots for $50. Yeah. 50. I was tempted, but I really really don't need more boots for Izzy (especially not after another amazing deal I scored last weekend). I did call Irie's mom, who needs eventing boots, and she was thrilled to have me pick them up for her. Such nice boots. I'm a tiny bit jealous, but I love my Nunn Finers.

Then I moseyed down the english stuff aisle, oogled some nice brushes, and started looking for bell boots. I found an XXXL model of the pro choice boots, but that's too big, even for Izzy. That's when it caught my eye. Eskadron Climatex Bandages. I've oogled them before, but at $70 a pair, it's a lot for me to stomach. However, the local store had them on special and I got a black pair for $32.

It was such a good deal that I totally forgot the vet wrap and had to stop somewhere else on the way home to pick it up.

Speaking of good deals, at a used tack sale at the derby last weekend, I got a set of baby blue Eskadron jumping boots (open fronts and hinds) for $10. And a matching Eskadron pad, also $10.

It is the week for deal shopping, I tell you. Anyone else scoring out there?

PS Izzy is going to get her first ever set of shoes soon. Very exciting.
Posted by SprinklerBandit at 2:39 PM