The Weather Outside is Frightful 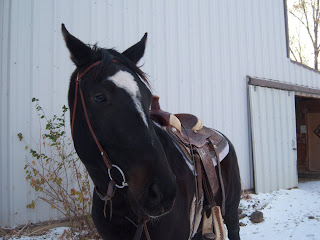 Izzy and I continued the great western experiment yesterday afternoon. She is not so sure about this whole deal. (As you can see, we've also borrowed a headstall and reins.) Unfortunately, we're also in the middle of some super nasty weather for us, so it never got about like 23 degrees f yesterday and it's supposed to be a high of 17 today. I realize that for some of you, that's nothing, but here it's pretty big.

Anyways. I'm mostly just complaining because of Izzy's new footwear, which apparently is somewhat like having shoes, and therefore is bad on ice... yes, the road we cross to go to the arenas is a sheet of ice. Yikes. We tip toed across it yesterday, but I'm not sure I want to tempt fate and do it again today. Maybe I'll wait til Sunday... 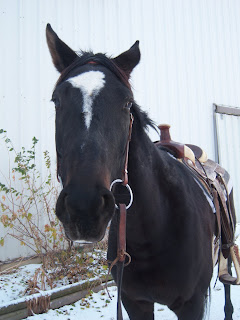 In honor of the fact that we are pretending to be western and the fact that I'm down to one pair of jeans that fit and that I sort of like, I went to one of our numerous western tack stores yesterday and actually made out with two pairs of jeans that I love and a pair of boots. The boots are WAAAAY nicer than my paddock boots which were sorely in need of replacement and they actually keep my feet warm. Plus, I can wear them on my husband's family's ranch and to work in.

I am also probably going to buy Izzy a saddle pad--what we've cobbled together for now isn't really ideal and there are some interesting low-cost options that I think would work nicely. I'm thinking that I'll exchange ride time today to go look for a saddle pad, then bring it out to the barn to mix her grain for the weekend and try it on. (And probably ride, too, since I already have her tacked up.)

After yesterday's ride, I am more optimistic about the whole thing. We were trying to do the whole 'jog' thing instead of trotting and it in general did not go well. Why? Well, because of all the same reasons that we've struggled with our trot work. First, she wanted to throw her head up and LEAP into trot/jog. When I wouldn't allow that, she'd then throw her head down and dive onto her forehand while running in the trot. We had probably 3 separate moments of 6 or 7 strides of a nice jog. 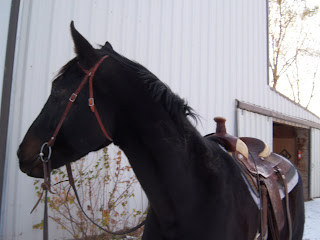 And really, is there a more fun and cute way to do it?

I still want a fancy headstall, but there's no way that's happening now. ;-) Someday...
Posted by SprinklerBandit at 9:28 AM