The Best and Worst 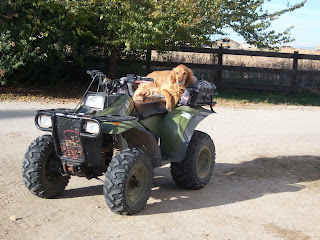 First off, a picture of the barn dog "helping" feed on a windy day. He didn't want to get off the 4 wheeler. 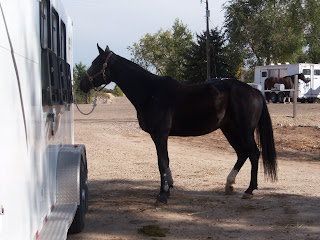 The lesson was great! Izzy warmed up really well. We focused on 'fingertip control' at first, in which I try to get a maximum response to minimal aids. Next, we worked on focusing on where we wanted to go in order to get our horses to move with purpose. An example would be instead of just asking for a trot transition, focus on a place you want to get to and then ask. This gives you a goal and allows your horse to obey promptly.

We also did an exercise in which we lightened one leg at a time in the stirrups, allowing our whole leg to contact the side of the horse instead of just putting our weight in our stirrups. This will be important later.

The first exercise we worked on was just cantering over poles set at a 90 degree angle to one another. It was a long three, a comfortable four, or a short five, and we got to do all three variations. Next, Stephanie set the poles up to 2' verticals and had us canter over those both directions, focusing on getting four comfortable strides, jumping perpendicular to the fence, and staying balanced. It was harder than I thought.

Whoa. That was hard.

I went first and really struggled with it because I have some major position flaws that this exercise highlights. First off, I tend to move around too much in front of the fence, which makes Izzy shorten because she's confused. Then, my in-air form is bad, so I take back on the reins and totally lose my legs, which makes leg yielding through the turn virtually impossible. We manage to get over the second fence, but not the third.

Finally (probably 3 or 4 tries later), I seem to get it. I shorten up my reins, and grab Izzy's mane about a third of the way up her neck. This forces my hands to stay forward, which keeps me in better balance and allow me to use my leg. We make the second jump on a fairly severe angle (yay Izzy! Already compensating for my dumbness!) We barely made the turn to the third jump (oxer), and I showed it to Izzy too late. BRAKES!

The good news is, I wasn't ahead of her and my position barely even bobbled when she stopped. It was just poor riding by me and greeness by her, so Stephanie had us canter around and do that jump alone. Izzy was brilliant.

Then, we put all three together. We developed a rhythmic canter to the first jump. I put my hands in her mane and kept my leg on. We did a nifty leg yield through the sharp left corner and caught the second jump square in the middle. I didn't worry about her lead and made the right hand turn quickly enough to allow her to see the jump before we were right on top of it. I kept my leg on and my hands still and we positively FLEW over the oxer!! 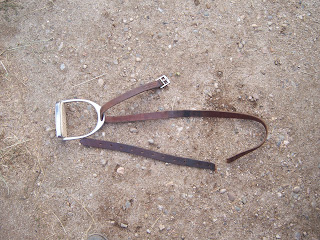 Yep, stirrup leather totally busted about a stride after the fence. If only I'd paid more attention to the lesson earlier about distributed my weight through my leg instead of just my stirrup. I went flying (dumping? It wasn't graceful) off Izzy's left side, and my lesson buddy assures me that she let out a mighty buck once I was off.

It was pretty hilarious. I mean, I was done. We nailed the exercise, so there was no reason to do it again. I just sat in the sand for a moment, hurting and processing. Then I got up, pulled the other stirrup off the saddle, and rode Izzy around to cool out while my lesson buddy finished up.

Several thoughts:
1) I have not fallen off Izzy in well over a year, so I was more than due.
2) I cannot imagine a better way to come off--neither of us has any confidence issues due to it.
3) Since I am a consummate tack-whore, it is kind of embarrassing to fall off due to tack failure.
4) That said, due to the aforementioned tack-whoring issue, I actually have a new pair of leathers (nylon-lined) at home. The only reason I wasn't using them was because they didn't fit my current irons and I was suppressing my tack-whoring impulse to go buy new irons. Lesson learned: never repress a tack whore.
5) I consciously decided not to give my tack a once-over the night before the lesson because I thought I was too busy. Ha. Pony club was right. Check your leathers.

This jumping thing is addicting.

Posted by SprinklerBandit at 8:17 AM