Ok, so much to my surprise, my mom managed to snag some pictures of Cuna and I at the show despite having a new-to-her camera and a sum total of no working batteries. I don't know how she conned it into taking pictures, but she got a couple of decent shots. 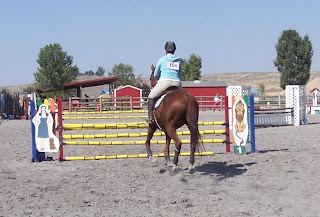 Here goes! Cuna and I are approaching jump #1 in the 2'9" class. This is actually the highest he and I have jumped together in competition. It rode great, and honestly doesn't look too big in the pictures, so I think we're game to have another go when I can afford shows again.

Note: when I say "it rode great", I mean the course was flowing and I was adequately challenged without feeling overfaced. I do not mean that I rode horribly well this round, unfortunately. 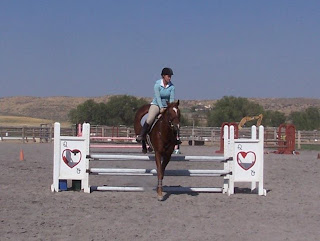 After jump 1, we do a hard right rollback to jump two, the white oxer. This is the one that I thought would get me jumped out of the tack, but it actually went fine. 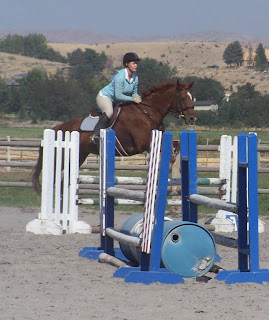 And jumping out of the triple! This was our super awkward triple, where I put three in the two and one in the one (are there extra points for inconsistency?). Still. At this point, we had gotten our acts together and we look ok.

I actually like a lot of things about my position. There is a straight line from elbow to bit, my back is flat, my eyes are up, and my leg appears to be in a decent position. Maybe I've finally started resetting my positional defaults to something not-horrifying to see in person. Yay!

In the foreground, you see the barrel oxer. They put the rail up and squared it in our next class so it could be jumped either direction. Hence, you see why I was not upset with Cuna about pulling a rail when tired and running downhill. It was a substantial jump and a lot of people had trouble getting over it. I don't recall anyone falling, but there were many refusals and quite a lot of rails down.

On looking at the picture, I actually wonder if Cuna might have pulled the rail because he thought he remembered how tall it was and didn't think they'd raised it. Huh. Maybe? We were genuinely exhausted though, so I'm sure that was it.
Posted by SprinklerBandit at 2:42 PM