Ooops or "Should've Seen that Coming"

I remain on super hateful concussion protocol, which means riding is tabled BUT THEY STILL LET ME DRIVE.

It's winter here, which means snow and ice and occasionally, super artistic fog.

This weekend, I wanted to see how Courage was feeling, so I put him in a great outfit to lunge him.

But I liked my cool, arty-ish arena shot, and I thought it could be even cooler with the dressage horse standing on the only exposed patch of sand, staring off into the distance.

I set up that shot.

Courage sort of looked at me. 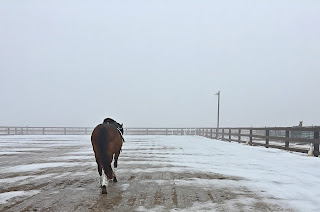 It wasn't the arty shot I had in mind, but I guess it worked out ok?

PS Yeah it took like 10 minutes to catch him in a super tense walking chase because I DID NOT WANT him to break my favorite reins and he DID NOT WANT to play along. 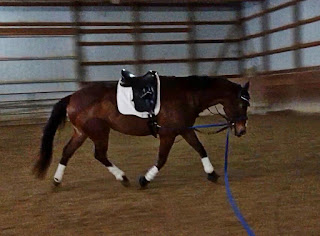 But he felt great. So if I could ride. That would be something.
Posted by SprinklerBandit at 9:20 AM