Let me begin by saying, I love love love my horse with turnout. Yesterday, we took her to a facility that neither she nor I had ever been too. She was a little up at first, in that she wanted to look at stuff, but she did not spook one single time while we were there. I didn't even feel the need to lunge her before hopping on. That's how awesome she is.

We trailered in with Irie the Halfie and his mom. 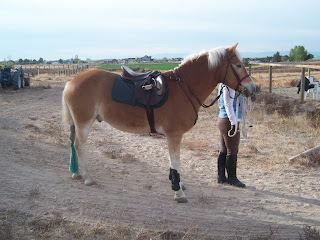 He is adorable. He isn't as clean as his mother would like--we had a flat on the trailer and some maneuverings to get there on time.

On to Izzy! (Thanks to Irie's mom for taking all the pictures with my finicky camera.) 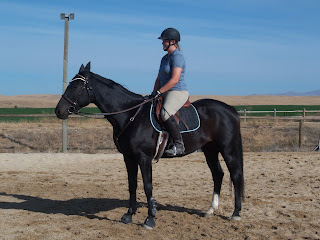 Doesn't she just look fabulous with that hand-picked tail, clean tack, and fancy lil' bonnet? I'm also decked out in some of my dover clearance spoils. (Kerrits GRASS breeches and ariat half chaps ftw!)

We started out cantering a circle of poles set 40' apart. We were to half halt directly after the pole, then ride positively to the pole itself. 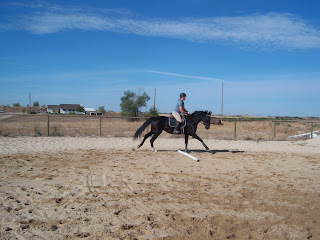 Izzy is a rockstar. 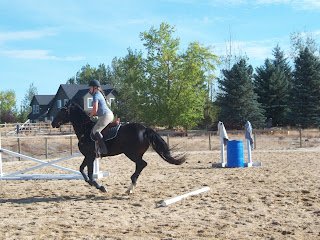 As I mentioned before, I'm counteracting my tendency to ride with my hands in my laps. Apparently, thanks to doing oodles of dressage, I always end up doing too much and not just letting Izzy find her own balance and develop some responsibility for herself. Stephanie Goodman told me to ride like McLain Ward and "equitate". I laughed, but I got my butt out of the saddle and my hands up and things went much better. Now I just need to watch some McLain Ward videos. I know him by reputation but I haven't really watched him.

I'm not really sure what gait we're demonstrating here. Half a flying lead change maybe? 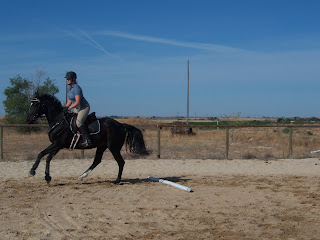 The next exercise was to canter down a 4 or 5 stride line of ground poles. That is why you should not be alarmed by Izzy's form in the following photo. 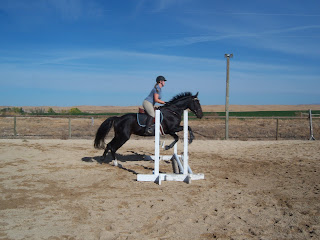 Stephanie pointed out that the reason our horses were jumping the poles instead of just cantering over them was that we were telling them to. We need to do a little less.

I guess I have this weird notion that I need to do something over fences, but I don't really know what. Due to my lack of understanding, I do lots of unnecessary stuff and mostly confuse my poor horse. Instead, I need to focus on figuring out my distance, but I'm absolutely not allowed to tell Izzy where to take off until I'm 100% sure (you know, in like a couple years).

Then we put the poles up to crossrails and did the line in 4 strides. 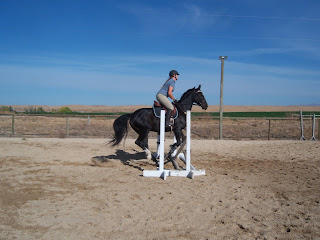 Finally, they were set up as a large cross rails to an ascending oxer. We cantered in, which I have never intentionally asked Izzy to do before. She was amazing. I have an undesirable tendency to lose my lower legs back and then my upper body forward after the jump, but we can work on that. In the mean time, I'm totally thrilled at how amazing Izzy was. 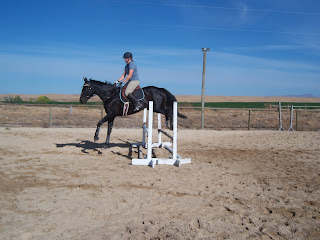 She was bold and brave and forward and fabulous. She never thought about stopping or running out, regardless of what stupid things I was doing on top of her. 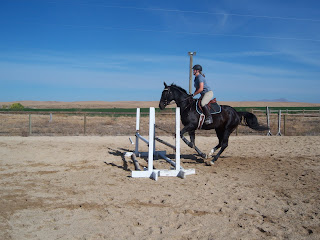 I dunno. I think we're great for each other. She's an even 16.0 hands and just right for me. 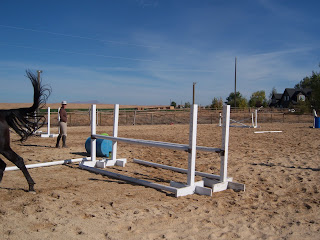 The final exercise was vertical to oxer in 6 strides off the right lead. Look! The back rail of the oxer was like 2'6". That is the highest we have ever jumped!! Izzy made it feel like nothing. Stephanie commented that she kept the jumps low because Izzy isn't 100% on where to put her feet yet. Just think how great she'll be when she's solid.

I was totally pumped. What a great lesson.
Posted by SprinklerBandit at 8:51 AM